The ConCourt finding has massive implications for the future of the ungulate.

Buying and selling rhino horn is now legal in South Africa following the department of environmental affairs’ failure to convince the Constitutional Court of the need to appeal a High Court decision to overturn the moratorium on domestic trade in rhino horn.

The ConCourt finding has massive implications for the future of the ungulate.

In its application to the ConCourt, the DEA noted “government would effectively be facilitating the unregulated and illegal flow of rhino horn into the international market. This would violate the Cites ban on the import and export of rhino horn for commercial purposes”, which could result in an “overall trade suspension if rhino horn is exported in violation of the Convention. This will have a significant socioeconomic impact on the country”.

“There would be a reduction in State’s ability to detect and prosecute poachers. The reason for this is that the process to capture all the information relating to the rhino horn in private possession on the national database must be finalised and verified by either the national department or the provincial conservation departments,” the DEA said in its application.

“If the authorities are not able to establish how many horns there are in private stockpiles, who owns the horn or where it came from, they will be unable to effectively prevent laundering of illegally obtained horn.” Much like Social Development Minister Bathabile Dlamini’s dragging of heels over the social security debacle, the DEA now finds itself in a massive legislative and capacity hole, except Molewa has had since 2009 to effect the changes needed.

Yet no one really knows what the future holds, only that rhino are still being killed at about three a day, and poachers are now striking less protected parks, reserves, rhino orphanages and more.

“At this point, it is clear rhino numbers in SA are decreasing due to poaching,” said Tanya Jacobsen, of the RhinoAlive Campaign.

“In fact, the last time rhino numbers were increasing healthily was when domestic trade in horn was legal, pre-2009. So hopefully this ruling will see the numbers growing again as more private reserves invest in rhinos and these reserves and national parks are able to generate desperately needed funds for better antipoaching resources.”

The DEA yesterday issued the standard lack of response from government when it has lost a case i.e. it is still studying the judgment.

“Whilst we are studying the implications of the order handed down by the Constitutional Court, it should be noted that the court’s decision should not be construed to mean that the domestic trade in rhino horn may take place in an unregulated fashion,” Environmental Affairs Minister Edna Molewa said in a statement yesterday.

“Since the moratorium came into effect, the department of environmental affairs has strengthened its laws, regulations and systems to ensure no regulatory loopholes exist with regards to the possession of rhino horn as well as a possible future domestic trade in rhino horn.” 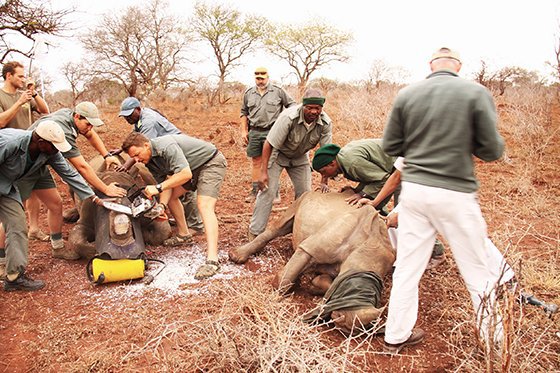 Molewa cautioned all domestic trade in rhino horn was subject to the relevant permits in terms of the National Environmental Management: Biodiversity Act, 2004 (Act No 10 of 2004) (NEMBA) and applicable provincial legislation being obtained.

However, in its ConCourt application for leave to appeal, the DEA noted this could take up to a year and requested 18 months to “put in place appropriate mechanisms to regulate domestic trade in horn and to manage the effect of uplifting the Moratorium on its international treaty obligations”.

Interested and affected parties had until March 10 this year to comment on draft regulations, which caused uproar at the time.

Outraged SA Citizens against Rhino Poaching (Oscap) spokesperson Kim da Ribeira said it was still unclear what the way forward would be.

“There is no permit system in place, the DEA said in 2009 when it installed the moratorium it wanted to put its house in order and get the database up and running and audited,” Da Ribeira said.

With no reliable numbers available, Da Ribeira said she had no idea how the system would work.

Jacobsen said it would be good to obtain accurate data from local sales. “Then we can start compiling real data and research on the market, instead of opinions on it,” Jacobsen said.

South Africa is well-known for putting out sweeping, grandiose, legislation with little or haphazard enforcement in place.

“I sincerely hope that there will be an auditing or followup process, and I’m sure there will be,” Jacobsen said.

“Furthermore, thanks to the Rhino DNA Indexing System (RhODIS), every legal horn will be traceable through a DNA sample, so if this legal horn enters the illegal market, and the perpetrators are then apprehended, we will be able to trace it back to the buyer,” said Jacobsen.

“It is already a legal requirement every horn legally taken from a rhino through dehorning is listed with RhODIS, which provides kits to rhino owners and reserves to facilitate this requirement.”

The Endangered Wildlife Trust (EWT) – which had applied to be amicus curiae in the matter – also took issue with the ConCourt’s decision.

“A worrying consequence of the setting aside of the moratorium retrospectively is the application by two of the accused in a rhino horn syndicate criminal trial of at least 10 people,” said the EWT’s statement.

“The accused have, subsequent to this judgment, applied for the bulk of the charges against them to be withdrawn, as they were charged for illegal possession of rhino horns under provincial ordinances at a time when the moratorium was in effect. This could also potentially have an effect on various pending large criminal trials.”

The EWT said the scourge of rhino poaching and illegal wildlife trade was decimating wildlife populations globally and South Africa was being particularly hard hit.