The litigation follows on the heels of the DA's application in the high court to set aside the president's decision to get rid of the former finance minister and his deputy. 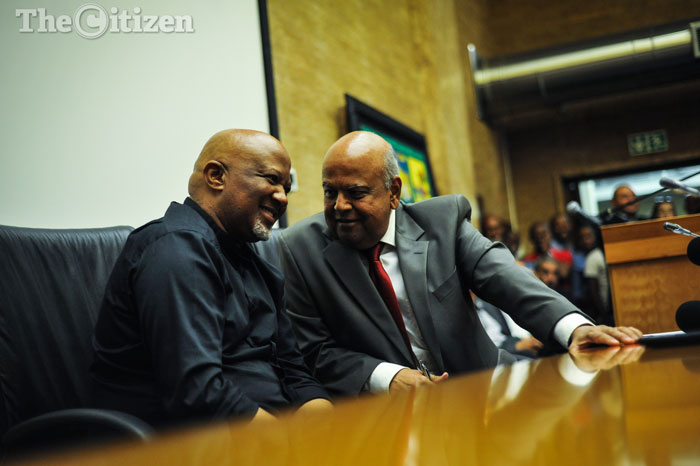 Ex-Deputy Finance Minister, Mcebisi Jonas and Ex-Finance Minister Pravin Gordhan during a press conference held inside the National Treasury, Mcebisi and Pravin were fired the night before during a Cabinet reshuffle by President Jacob Zuma, 31 March 2017, Pretoria. Picture: Jacques Nelles

The Helen Suzman Foundation (HSF) and My Vote Counts NPC (MVC) have approached the Constitutional Court to set aside President Jacob Zuma’s decision to fire Finance Minister Pravin Gordhan and to declare that he and the National Assembly had violated their constitutional duties.

The litigation follows on the heels of the Democratic Alliance’s application in the High Court in Pretoria to set aside the president’s decision to get rid of Gordhan and his deputy, Mcebisi Jonas, on the basis that it was irrational.

Judge Bashier Vally on Thursday last week gave the president five days to provide the DA with the record and reasons for his decision.

DA federal executive chairperson James Selfe said at the time he expected the record to include a so-called intelligence report allegedly implicating Gordhan and Jonas as plotting against President Zuma.

The court will also be asked to direct speaker of the National Assembly Baleka Mbete to institute an investigation into Zuma’s conduct, with the hope of possible removal proceedings against him in terms of Section 89 of the constitution.

Antonie said the organisations firmly believed that if one had to consider the dismissal of Nhlanhla Nene as finance minister in 2015, the Nkandla scandal and the Cabinet reshuffle, the president could be seen as having established “a pattern of irrational and unlawful conduct”.

He alleged the president’s conduct showed a lack of proper regard to the constitution with “an astonishing disregard for the situation of the poor and disadvantaged sections of society, who will be the first to suffer the economic consequences of his irrational actions”.

“In addition, the National Assembly and its speaker have failed to take the necessary steps against the president’s conduct.

“The National Assembly has, in particular, failed in its duty to maintain oversight of organs of state and to hold them accountable, as required under Section 55(2) of the constitution. For these reasons, we are launching this application against both the president and the National Assembly,” he said.

Antonie said the immediate reactions by the financial markets to the downgrading by international ratings agencies have been well publicised, but they were even more concerned about the longer term damage to the real economy.

“These downgrades will lead to higher borrowing costs for government. The consequential increase in government’s debt servicing costs will make less funding available for government spending, particularly when annual economic growth is well under 1%.

“This will put pressure on state spending on education and training, human settlements, health and social protection, which already make up 56% of total government expenditure. Inevitably, a general dampening of business confidence and a negative effect on investment decisions will in time lead to lower economic growth and fewer new jobs being created,” Antonie said.