‘Partying cost me my child’

11-year-old girl was allegedly raped and killed by her mother’s friend on Monday morning in Refilwe, Cullinan, just outside Pretoria. 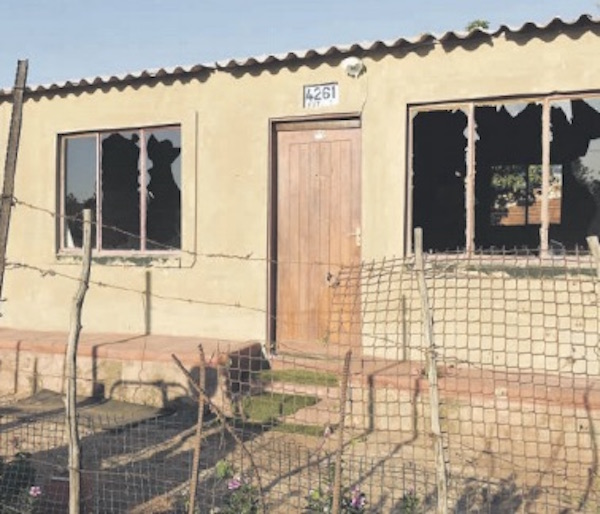 ABDUCTED. The house in Refilwe near Cullinan where Lethabo Ngobeni’s body was found. The community searched the area for the man who allegedly raped and killed her but he managed to escape. Police are continuing the manhunt. Pictures: Neil McCartney

If it wasn’t for her drinking and neglecting her children on a night out, a regretful mother said her daughter would still be alive.

The 11-year-old girl, Lethabo Ngobeni, was allegedly raped and killed by her mother’s friend on Monday morning in Refilwe, Cullinan, just outside Pretoria.

Her mother, Paulina Ngobeni, told The Citizen yesterday that she had gone drinking with friends on Sunday night. The 33-yearold mother left her toddlers and Lethabo at her house.

But Paulina did not come home that night.

“On Sunday night, I parted ways with the man that allegedly killed my child and I went to sleep at my boyfriend’s house. The following morning, I went home and didn’t find my child there. My sister told me that she had sent Lethabo to go looking for me just before she left for school,” the shaken mother said.

Lethabo’s uncle, Lesiba Ngobeni, said the Grade 5 pupil was sent to her alleged killer’s house as her mother was last seen with the man.

But the man apparently kidnapped the child and locked her in the house.

He allegedly raped her and killed her by breaking her neck, her uncle said.

The frantic hunt for Lethabo started late on Monday afternoon when the child did not return home from school.

Paulina said she thought her daughter was still playing with friends, but it was the child’s uncle who suggested that they return to the man’s house.

Upon arriving, Lethabo’s aunt broke a window in the house as he refused to open for her.

“That is when the alleged killer opened the door. As she came in, he went out through the door and she found the child on the cold cement floor, with her neck broken and dead.”

The alleged killer was seen fleeing the scene. T

he room, which was ultimately vandalised by the angry community, left a gruesome image of the ordeal, as the mattress was drenched in blood.

A game of cat and mouse was played between the alleged killer and the community yesterday when he was spotted in a veld.

Joined by school children, men and women ran across the large area in an attempt to catch him.

During the chase, the man apparently stripped off his clothes to camouflage himself in the bushes. Again, he managed to flee.

Lethabo’s uncle put the blame on his sister, accusing her of neglecting her children.

The mother told The Citizen that she regretted her actions, as the accused man had previously served time in jail for a rape.

“I just didn’t think he would do this. I had known him for a while and I did not think he was this type of person,” she said.

Police spokesperson Connie Moganedi said a manhunt was launched for suspect, who will face rape and murder charges.

Body of woman found after being raped and killed

Woman accused of dismembering husband, dumping remains in pit latrines, too ill for court
6 days ago
6 days ago

Woman accused of dismembering husband, dumping remains in pit latrines, too ill for court
6 days ago
6 days ago