More than half a million people in Gauteng still waiting. 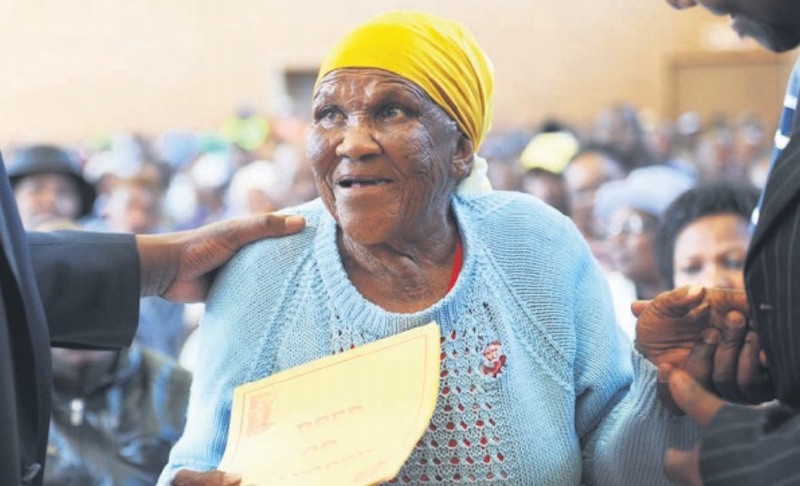 Maria Sibanda, 87, was jubliant yesterday when she was one of more than 2 000 people who received title deeds in Gauteng yesterday.

“I had been waiting for a house since we were freed in 1994,” exclaimed Sibanda.

Sibanda, who was originally from the outskirts of Randburg, received an RDP house in Orange Farm last year after decades of living without land of her own.

The octogenarian said she was immensely relieved to hold a title deed, which she said would be her legacy to leave for her four grandchildren, as well as her daughterin-law, who shares the house with her.

About 200 000 Gauteng residents have yet to receive title deeds, according to the provincial government, while more than 600 000 people were reportedly waiting for formal housing.

Sibanda and scores of others were bussed into Braamfischerville in Soweto yesterday to attend a ceremony presided over by housing MEC Paul Mashatile.

While the thousands of new title deed holders would be celebrating this long-awaited milestone, several communities who recently took to the streets demanding a speedier rollout of decent housing and services may have to wait for five years or more.

“We are planning that in the next five years or so we should reduce [the backlog] substantially, particularity with the introduction of mega projects,” Mashatile told journalists yesterday.

About 30 of these projects were aimed at building about 10 000 units at a time over the next five years with the goal of slashing the housing backlog in half.

But Mashatile warned Gauteng was likely to experience a housing backlog for some time.