After battling since Saturday to put the fire out, emergency services leave piles of tyres to burn. 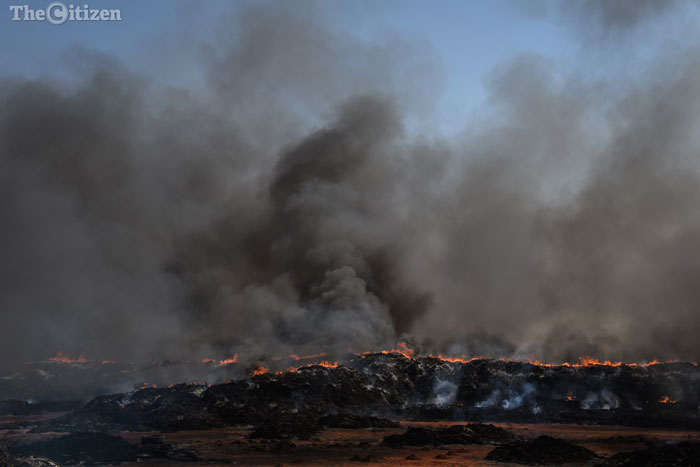 Some of the approximately 10 000 tyres that had caught fire on Saturday is pictured still burning in a field in the Sunderland Ridge area, 5 June 2017, the tyres had been left to burn out as the emergency service did not want to pollute the water table and ground levels, Pretoria. Picture: Jacques Nelles

The City of Tshwane has decided to let thousands of tyres that caught fire at the weekend burn out instead of dousing the flames, to prevent water and ground pollution.

MMC for community safety Derrick Kissonduth said Tshwane emergency services had battled the raging fire – which was fuelled by about 10 000 tyres – in Sunderland Ridge, Centurion, since Saturday night.

He said the initial attempt was to prevent the fire from spreading to the other stacks of tyres, which were about 20m apart.

“The tyres were stored in an open field to be used at a rifle shooting range. Investigations will ensue to deal with the unlawful conduct that took place on site,” Kissonduth said.

Tshwane emergency services spokesperson Johan Pieterse said it was impossible to say how long the fire would continue to burn.

“It could take up to two to three days before it is completely burnt out.

“We hope it will be sooner rather than later. We are also constantly on the scene to monitor the situation,” Pieterse said.

He added it was unknown how the fire started, but no one was injured.

Kissonduth, together with the chairperson of the community safety oversight committee and ward councillor in the area, visited the scene to assess the risk and determine the way forward.

“A decision was then taken to let the fire burn out as the emergency services did not want to pollute the water table and ground levels by putting a large volume of water on the fire.

“Protecting exposures and separating tyres from the burn area will continue to be a tactical priority, and to clear all other tyres in the area.”

Kissonduth said tyre fires presented a potential threat to the environment similar to an incident involving an oil tanker or railway tanker carrying flammable substances. This could turn the tyre pile into a running oil fire.

Wnvironment and agriculture management will monitor the impact of air pollution at the air quality monitoring station at Pretoria West Power Station.

Kissonduth said community members could expect to see thick, black smoke. However, they need not panic as the fire posed no direct harm.