The vice-chancellor has warned that the restoration of ties between former political foes, who have now turned on Zuma and his faction, will have far-reaching consequences. 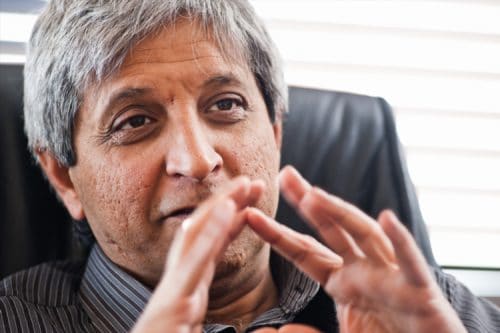 Former president Thabo Mbeki’s interview on Thursday night on Power FM was in effect the realignment of the “pre-Polokwane social and political forces“ with those who were previously critical of Mbeki’s leadership, acknowledging that they were wrong and are now using him as inspiration to challenge President Jacob Zuma.

That is according to Wits University vice-chancellor Professor Adam Habib, who has warned on Twitter that the restoration of ties between former political rivals, who have turned on Zuma and his faction over corruption and state capture allegations, would have far-reaching consequences.

The televised interview held in Sandton, Johannesburg – which included political figures such as trade unionist Zwelinzima Vavi, EFF leader Julius Malema, former deputy finance minister Mcebisi Jonas and ANC national spokesperson Zizi Kodwa – has garnered an array of mixed reviews after Mbeki criticised his successor’s administration, saying there was a “lack of cohesion” in his government and there was a “confederation of ministries”.

The former statesman suffered a bruising political defeat in December 2007 at the ANC’s seminal 52nd national elective conference at Polokwane, Limpopo, to Zuma’s faction, which included the likes of Vavi and Malema at its fore.

Mbeki said people in the ANC were fed lies about him leading up to the conference in order to topple him from power, including Malema.

“Lies were told to Juju [Malema] here by people whom Juju had no reason to disbelieve. Quite correctly‚ he believed them and acted accordingly. He discovered much later that he was lied to,” he said.

Earlier this week, SACP general secretary Blade Nzimande confessed he felt a sense of betrayal to towards some of his comrades he worked with to remove Mbeki as the governing party’s president then, saying their intention was to loot the public purse.

“We feel betrayed. Personally, I feel betrayed … Our trust has been broken,” Nzimande said, speaking at the SACP’s 14th national congress, currently under way in Boksburg, Ekurhuleni.

The conversation with Mbeki on 98.7 is in effect realigning the pre-Polokwane social & political forces.The consequence will be far reaching

Mbeki just said that Zuma does not know how to manage cabinet and create the policy centre? He essentially questions Zuma's ability to lead.

Mbeki describes SA government as a ‘confederation of ministries’