DA still ‘in the dark’ about why EFF is boycotting them

The party has written a letter to the EFF to request a meeting. Malema has said they'll get the meeting in heaven. 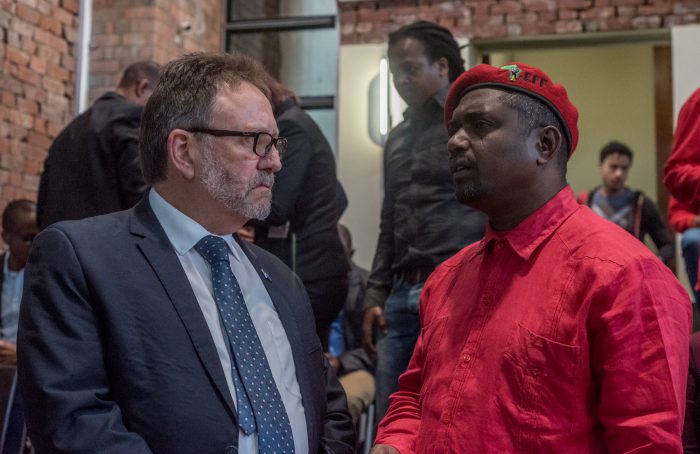 The DA’s co-governing ally, the Economic Freedom Fighters (EFF), is not holding them hostage in council as they have not made any formal demands, DA chief whip James Selfe says.

Following the EFF’s no-show at Tshwane and Johannesburg council meetings last week, Selfe said he was unsure of what the EFF wanted.

The discord started when United Democratic Movement councillor and then Nelson Mandela Bay deputy mayor Mongameli Bobani was sacked in a motion of no confidence last month.

The EFF described it as a “bullying tactic” by the DA; as a result it chose to support the UDM despite allegations against Bobani of corruption and voting with the ANC.

“[If the EFF wants Bobani reinstated], they haven’t expressed it. If so, it would be strange, because we have a commitment from them to us to eradicate corruption,” said Selfe.

On Saturday, the EFF announced they would not meet with the DA, as they were “not in a coalition” and did not owe their ally “any explanation whatsoever”.

The party said the boycott was to show the DA it could not govern municipalities alone.

Selfe said: “We have written to them to request a meeting to discuss whatever issues they might have, but they have not responded.”

EFF leader Julius Malema tweeted over the weekend that the DA would get their meeting “in heaven”. He appeared unimpressed with a press statement in which the DA called the EFF’s boycott “short-sighted”.

Due to the absence of the EFF, the Tshwane council failed to pass a motion to auction the mayoral mansion, and the Johannesburg metro could not pass one to receive R22.5 million to educate communities on HIV/ Aids.