The EFF leader says while Zimbabwe had leadership problems, South Africa's political problems can still be solved through education. 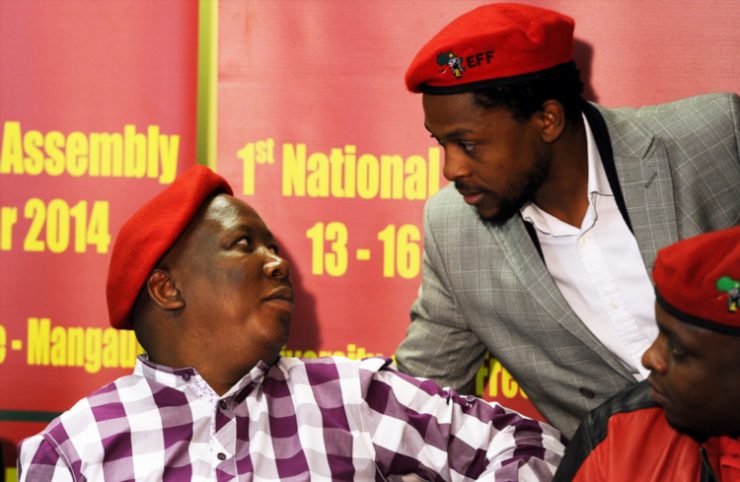 In a series of tweets, they also highlighted the “problems” in South Africa, as opposed to those in Zimbabwe, further advising on how they could be overcome in a peaceful manner.

Malema said comparing the crisis in South Africa to Zimbabwe’s signified that people still needed political education, as “criminals” in Mzansi were kept in power by the voters, unlike in Zimbabwe.

“Our elections are free and fair without any form of intimidation, but voters just love their kleptocrats,” said the EFF leader.

While Zimbabwe needed the army to ensure a smooth transition, South Africa needed a politically conscious society. Malema said there was, however, still hope for South Africa, as the younger generation was “beginning to change the narrative”.

“It will take long, but it will happen.”

Though South Africans had been calling for President Jacob Zuma to step down and blamed the ANC for keeping him in his position, Malema said they were not our only problem.

The problem of whiteness in my country is perpetuated by the fact that the revolution took place in 94 but the oppresser lost nothing, not even political power because they still control who becomes what through financing factional battles in the ruling party. Truth hurts I know

“The white supremacists are a big problem in this country, and the ruling party is extremely scared of them, if not captured. We need to change the patterns of property ownership in this country if we want a lasting solution,” he said, referring to the ownership of land.

“Whiteness” was a problem in the country because though it got its freedom in 1994, “the oppressor lost nothing”.

“Not even political power because they still control who becomes what through financing factional battles in the ruling party. Truth hurts, I know,” he said.

Most of his followers, however, criticised the EFF leader for speaking badly about the ruling party now that he was no longer a member. They blamed him for playing a role in putting Zuma in power, they argued.

But Malema said though he acknowledged that he was part of the problem he was now highlighting, he also “took responsibility and changed, the voter should do the same”.

One of Malema’s solutions included a rerun in all hung municipalities.

Ndlozi shared Malema’s sentiments, and said while Zimbabwe had a crisis of leadership, ours was a crisis of voters.

Many think South Africa, like Zimbabwe has a crisis of leadership. But at the core, let's be honest, ours is a crisis of the voter. For if the voter decides tomorrow, Zuma will be no more. No military intervention needed!

“If the voter decides tomorrow, Zuma will be no more. No military intervention needed!

“South Africa under Zuma lost continental and regional credibility. It took a retired liberation pensioner, Kenneth Kaunda, to speak to Mugabe for him to accept Zanu-PF’s recall. No one takes South Africa’s leadership seriously anymore. No one!” Ndlozi said.