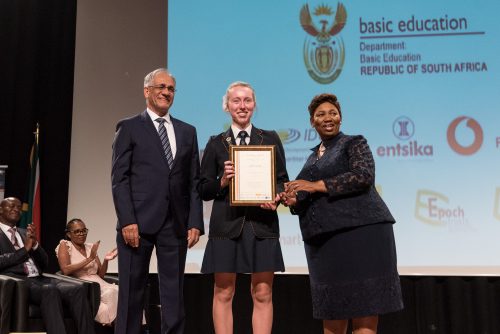 Deputy Minister for Basic Education Mohamed Enver Surty, top learner in the country Janke Van Dyk and Minister for Basic Education Angie Motshekga stand for a photo after the Announcement of the Matric Results for the Class of 2017 at the SABC studios in Auckland Park, Johannesburg on 4 January 2017. The Minister announced the Matric Pass rates and university exemptions for learners across the provinces. Picture: Yeshiel Panchia

More pupils across the country wrote the National Senior Certificate (NSC) examinations in 2016 compared to 2017, the Department of Basic Education Director General Mathazima Mweli said during a briefing on Thursday night.

Minister of Basic Education Angie Motshekga will be announcing the NSC Examination pass rate for 2017 later on Thursday evening.

The class of 2016 received a 72.5 percent pass rate which was an improvement from 2015’s 70.7 percent. This figure included so-called progressed learners, those who had failed Grade 11 twice and were moved onto Grade 12.

“[The] highest number of bachelor’s degree passes was in KwaZulu-Natal with Gauteng being the second highest.”

Free tertiary education in SA will be phased in, says Mkhize