Although off duty, he tried to help a taxi driver who was being hijacked when he was shot dead, says JMPD. 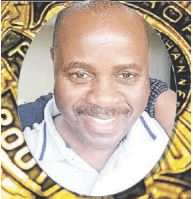 The Johannesburg Metro Police Department (JMPD) is mourning the death of another metro police officer.

David Ratshikhopha, pictured, was shot in the head on Tuesday morning during the hijacking of a minibus in Booysens.

“As he was trying to assist the taxi driver, who was being hijacked, the suspects shot him and killed him,” said JMPD spokesperson Wayne Minnaar.

MMC for public safety Michael Sun confirmed that Ratshikhopha died at 3am at Milpark Hospital.

Minnaar said the killings were a big worry to the JMPD. “We are very sad to lose so many members. In three weeks we have lost three officers. It is very stressful. This is affecting the morale of the officers,” he said.

“Yesterday, the officers took the wife and children to the scene of the incident. The family is very traumatised.”

Another JMPD spokesperson Edna Mamonyane was at a loss for words.

Minnaar commended the officer for his bravery.

“The officer was just passing the location. He was alone and he was not on duty when the hijacking took place. The officer was very brave to intervene on his own because normally the officers have partners,” he said.

“I commended him for his bravery and thanked him for going beyond the call of duty to try and uphold the rule of law,” he said in a statement.

The City of Johannesburg is offering a reward R100 000 to anyone with further information about the shooting.

“In the pursuit of keeping the residents of Johannesburg safe, I must first and foremost ensure my law enforcement officials are safe when conducting their work. This is why we are offering this reward,” said Mashaba.

Minnaar said the national department of justice is taking the killing of police officers seriously. “The law is making sure that justice is served. We will not rest until the suspect is found,” he said.