The department says it has a plan in place to address the issue of sanitation across all schools. 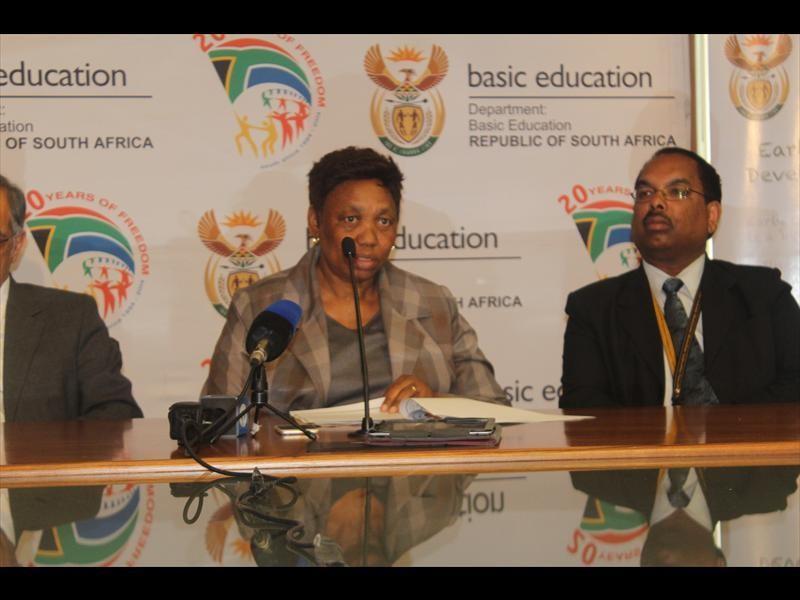 Minister of Basic Education Angie Motshekga held a press briefing to provide an update on the rollout of infrastructure, particularly that of adequate sanitation and ablution facilities in schools.

The briefing comes after a meeting of the Council of Education Minister she held today with all education MECs, heads of the provincial education departments and officials responsible for infrastructure in the departments.

The meeting was held to enable the minister to ensure that the sector responds to the President Cyril Ramaphosa’s directive to receive an audit of sanitation facilities in schools within three months and thereafter a comprehensive plan to address shortcomings identified in the audit.

Ramaphosa issued the directive following the death of five-year-old Lumka Mkhethwa, who fell into a pit toilet at the Luna Primary School in Bizana‚ Eastern Cape.

A similar incident happened at a school outside Polokwane in 2014, where five-year-old Michael Komape drowned in a pit toilet.

The department’s spokesperson, Elijah Mhlanga, said the problem around infrastructure at schools had been poor service delivery by provincial governments, but said the department had a plan in place to address the issue across all schools.

During the briefing, Motshekga said the president would receive a plan, with financial estimations, on how the department would urgently provide decent sanitation and ablution facilities in schools.

She said during the meeting, it was learned that some schools did not demolish pit latrines even after better facilities had been constructed.

The minister said ideally, schools should have one toilet per pupil, but that was unattainable due to overcrowding.

She added officials representing the provinces committed to ensuring that the rollout of sanitation infrastructure increases.

According to the minister, the number of pit latrines in the Western Cape has declined, and in Gauteng, there are only three pit latrines at schools.

She said schools without sanitation would be an urgent priority for the department.

While police investigations into Lumka’s death are ongoing, the minister said the department would work closely with the SAPS on the matter.

She said tragedies such as Lumka and Michael’s deaths forced the department to review its plans.

The deputy minister of the department, Enver Surty, said all provinces were working extremely hard at addressing the issue, though the scarcity of resources was a challenge that prompted a reprioritisation.

Motshekga said the department would provide the public with a quarterly update on the progress of the provision of adequate sanitation and ablution facilities.

The minister said provincial heads of departments would work with the national director-general to determine what the department needed to do to address this challenge.

She said another challenge her department had encountered was that of backlogs, with more than 2 500 insufficient sanitation facilities that had to be removed in Limpopo, and 2 600 of them in KZN.

She added Limpopo would need an estimated R3 billion so that adequate sanitation facilities would be constructed in schools across the province.

According to a handbook compiled by SECTION27 – which intervened as a friend of the court in the matter of fixing school infrastructure, brought by Equal Education last week – of the 23 589 schools in South Africa, 22% (5 225) have unreliable or no water supply.

The handbook, compiled with the help of Equal Education Law Centre, Equal Education, The Centre for Child Law, The Legal Resources Centre, The Southern African Litigation Centre and the Studies in Poverty and Inequality Institute, states that this figure is taken from statistics provided by the department in 2015. It also states that 44% of public schools in the country use pit toilets.

The handbook added that these statistics revealed that schools in the former Bantustan areas had the worst infrastructure.

“It is, therefore, invariably black South African learners who are most cheated of an acceptable learning environment,” reads the handbook.

It further states that the disparities in infrastructure resourcing at schools entrenched apartheid education.

Mandatory vaccination: Here are the places business wants to restrict access to
2 days ago
2 days ago

Things could get worse for ANC in 2024 elections, if they don't shape up
7 days ago
7 days ago

Mandatory vaccination: Here are the places business wants to restrict access to
2 days ago
2 days ago

Things could get worse for ANC in 2024 elections, if they don't shape up
7 days ago
7 days ago