Dr Lets Pretorius and his sons Wilhelm and Johan say they now want to petition the Supreme Court of Appeal for leave to appeal. 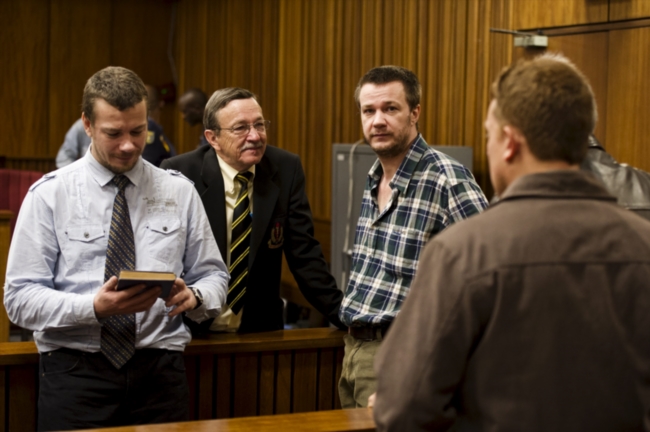 From left are Wilhelm Pretorius, Dr. Lets Pretorius and Johan Pretorius during their sentencing at the North Gauteng High Court in Pretoria on October 28, 2013. Picture: Gallo Images

One of the Boeremag’s leaders and two of his sons, who were in the right-wing organisation’s bomb squad, yesterday abandoned their application for bail, claiming the judge who sentenced them five years ago was “biased” towards them.

Dr Lets Pretorius, a medical doctor, and his sons Wilhelm and Johan initially applied for bail pending their bid to appeal against their convictions and sentences, but withdrew the application because they did not want Judge Eben Jordaan to hear their case, as they felt he was “biased”.

The plot included blowing up several targets, the murder of then president Nelson Mandela with a land mine and the creation of chaos and bloodshed throughout the country.

Their brother Kobus, who confessed to his role as master bomb maker and apologised for what he did after turning his back on his family, was sentenced to 20 years’ imprisonment. His appeal against his sentence was dismissed by the Supreme Court of Appeal.

Jordaan earlier refused Dr Pretorius, Wilhelm and Johan leave to appeal against their convictions and sentences.

The three said they now wanted to petition the Supreme Court of Appeal (SCA) for leave to appeal, but Legal Aid SA refused to pay for an advocate to represent them as it was of the view that their application would fail.

They initially wanted the court to order Legal Aid to pay for a senior advocate, who now lives in New Zealand, to represent them but Jordaan said this was clearly not practical.

They told the court they had drawn up their own petitions, but were told by the SCA that their papers were incomplete and they needed an advocate to assist them to get everything in order.

In an effort to assist them, Jordaan said he would request the Pretoria Bar Council to make an advocate available to consult with the father and sons on a free of charge basis.