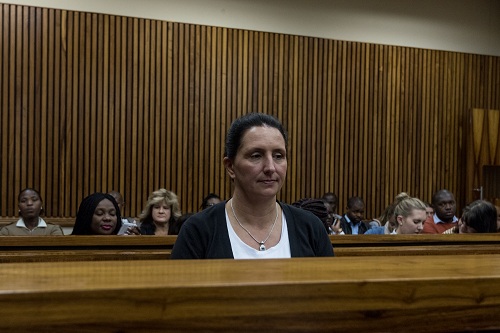 Convicted racist Vicky Momberg sits in the dock at the Randburg Magistrates Court on 11 April 2018. Momberg appeared back in court during a sentencing appeal. Picture: Yeshiel Panchia

Convicted racist Vicki Momberg’s latest tantrum may have landed her in more hot water as she faces additional charges related to an incident in which she allegedly swore at security officials escorting her to court last week.

Yesterday, department of correctional services spokesperson Singabakho Nxumalo confirmed the incident, saying the matter would be dealt with by the department internally.

He said Momberg “used foul language against department officials” when appearing in the Randburg Magistrate’s Court on Wednesday for the continuation of her application for leave to appeal her two-year prison sentence.

Momberg was charged internally after officials reported her to department management.

“The officials escorting the inmate indicated no desire to press criminal charges.

“The department will work with the inmate in correcting the offending behaviour, and render relevant rehabilitation programmes.”

In 2016, the real estate agent was arrested in Northcliff in Johannesburg after she was caught on camera shouting racial slurs at police officers who were attempting to help her after she became the victim of a car break-in.

Momberg was convicted last year and this year given a three-year prison sentence, one year of which would be suspended. She is the first South African to be imprisoned for using a racial slur.

As a sentenced inmate, Nxumalo said, Momberg was transported to court by department officials in a state vehicle.

Without divulging the full security detail, he indicated that it was a team of male and female officials. These officials took the inmate back to the centre (Johannesburg Female Correctional Centre) to continue to serve her sentence.

“Words used by the inmate are unpalatable and we will refrain from making them public.

“Key for the department is to ensure that corrective measures are taken against the offender and her path to rehabilitation must be realised,” said Nxumalo.