Maimane has to admit that he failed, because he didn't make sure she was treated exactly the same as any other party member, De Lille insists. 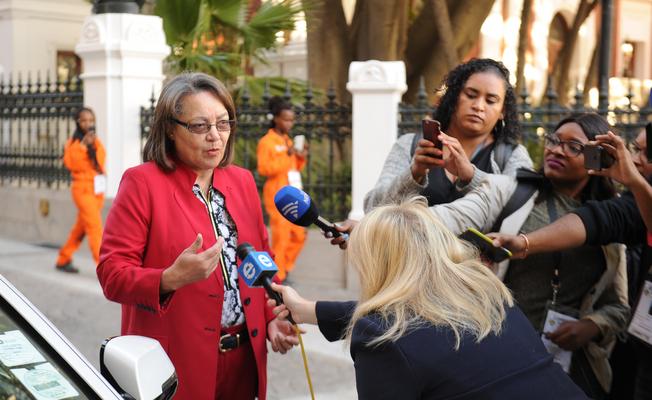 DA leader Mmusi Maimane has failed dismally in dealing with the escalating public spat between the mayor and the Cape Town DA caucus, according to the embattled Patricia de Lille.

Just days before the party is due to announce on De Lille’s fate, following an internal motion of no confidence against her, she said she felt confident she would eventually prove the caucus wrong, if not internally, then in the courts.

“Mr [Maimane], you must admit that you failed as the leader to make sure that Patricia de Lille is treated exactly the same as Dianne Kohler Barnard, like Helen Zille, like everybody else in the party who has been through a disciplinary hearing,” said De Lille.

“Admit that you have failed.”

She said Maimane had allowed himself to be used by party members who were running a campaign to drive her out of the DA.

Lamenting that she wasn’t only being treated unfairly, but that this may be so because of her race, De Lille said that white leaders in the DA who had gone through disciplinary processes before her had not received the onslaught of criticism that she had.

“Now, if you look in parliament, there was a lady who used to sit behind him [Maimane] until about a year ago,” she said.

“A lady by the name of Juanita Terblanche.

“Her father was the DA leader for the North West province, Chris Hattingh. Now, she was accused of some serious things, including taking money … Four years, she sat behind Mmusi Maimane in parliament and he respected her right to a due process. Why can’t you just make sure that these things against me get tested?”

De Lille also accused deputy caucus leader JP Smith of having mobilised the federal executive against her from the time she took office as mayor.

She said the party tended to believe his accusations “just because he is white, so he must be right”.

The mayor faced two disciplinary processes, including bringing the party into disrepute and one of allegedly interfering in an appointment process.

This, as two reports make allegations regarding her involvement in corruption.

The federal executive is meeting today and tomorrow to decide her fate.