Champions come out to race at Turffontein

Weights indicate there are many challengers to Legal Eagle in the R4-million race, while Strydom-ridden Green Pepper could be a prospective Pick 6 banker. 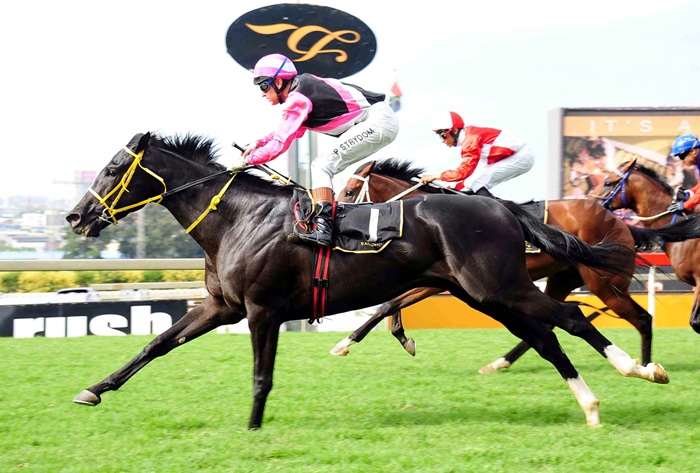 Piere Strydom will be aboard joint favourite Surcharge in today’s R2-million SA Derby over 2450m at Turffontein. Picture: JC Photographics

It is Champions Day at Turffontein where we have the running of three Grade 1 races. This meeting brings down the curtain on the Highveld’s autumn season and after this we will all be raiding KwaZulu-Natal.

Topping the card is the R4-million Premier’s Champions Challenge. This is a weight-for-age plus penalty race so generally your highest rated horse should come out on top and in this case it is Legal Eagle. So strictly on handicapping he looks a sure thing but on a couple of runs it looks there could be numerous horses who could turn the ratings upside down, for instance Nother Russia, who finished just a neck behind him in the Horse Chestnut Stakes.

There are also a lot of horses who come close on other form and they are Fort Ember, Silvan Star, Safe Harbour and Coral Fever. It could be a shrewd move to give yourself some cover in the Place Accumulator so go with three of them but my top three are Legal Eagle, Nother Russia and Safe Harbour.

In my view looking past the top two, Safe Harbour could be the freshest of the lot and has probably had the ideal prep leading into this race. For the Pick 6 Abashiri could be the dark horse.

The SA Derby is also run at level weights and the best handicapped runners should come out on top. The top-rated horse in this case is Surcharge who is my ride and he has an undeniable chance. On collateral form there is not much between Surcharge, Like A Panther, Noble Secret and Majestic Mambo.

Those four must be the main contenders on form but as the majority of the runners have not raced over this distance, nobody can be sure who will stay the best. For the PA go with three of those mentioned but for the Pick 6 include them all with as well as Royal Crusade and Cash Time.

The third Grade 1 race on the day is the Computaform Sprint over 1000m and once again as this is not a handicapped your highest rated runners should come out on top. The top horse is Sergeant Hardy by quite a distance and therefore he should be hard to beat. But in past he has been beaten by some of today’s opposition.

The other problem is that over 1000m the horses get worked up for a race which is over in less than a minute. However, you have a big field and the loading process becomes very important.

Some horses get very agitated and if you miss the break by just a small margin it can cost you. Therefore you have to back up Sergeant Hardy with Bishop’s Bounty and Trip To Heaven. For the Pick 6 add in Exquisite Touch and possibly Naafer if he comes to his best form.

We also have the Wilgerbosdrift SA Oaks and all the interest is whether Takingthepeace can win the Wilgerbosdrift Triple Tiara. It’s not easy to win all three races as you have to be very versatile. Sadly Takingthepeace has a shocking draw once again but she won the Fillies Guineas and Fillies Classic from the back. However, this is a big field so she could end up so far out of her ground it could be difficult for her to make it up.

What also makes it difficult is that horses like Green Top, Secret Potion and Silver Thursday are not far behind on their last runs. So pick between those four for the PA with Flitchity By Farr a possible dark horse for the Pick 6.

I’m riding Gottalottaluv and on merit rating she should struggle and she has a shocking draw. But I’m quite sure she will see out the distance and I’m hoping to run into the places.

Let’s go back to Race 1 which is a juvenile plate, on and on form Return Flight looks very hard to beat. The opposition looks very weak.

Race 2 is another Juvenile Plate and Atyaab and Master Magic look set to fight it out. Their danger could be Carbon Atom.

Race 3 is the Fillies Nursery where Ghaalla and Celtic Sea look to have the strongest form. You could banker either one for the PA. Their danger could be Captain’s Princess. I’m riding I Like it and as she is well held on form I would be quite happy to get a place stake for the owners.

Race 4 is the SA Nursery for two-year-olds and they can improve at different speeds. But on current form Bold Eagle looks close to a certainty. He is a PA banker for sure and should also be a Pick 6 banker. His main danger is Mr Flood who won his only start very comfortably and could be up to this level.

If those two are not good enough then consider the field for the Pick 6 because any of the others could win if you look past the top two.

Race 5 is the Camellia Stakes and here I’m riding Green Pepper who is the best handicapped horse in the race. Unfortunately she has had some hiccups in the past and last time when I rode her she battled to keep up with the pace. On her best form she could quite easily be a banker in all bets but you might have to cover and include Tahini. Put both in the PA but for the Pick 6 add in Secret Star, Spring Wonder and Heaps Of Fun.

Race 10 is the Gerald Rosenberg Stakes and the highest rated runner should have the advantage. This time it is Wind Chill and I make her a hard horse to beat. She raced against all the horses running in the Champions Challenge and was not beaten that far. Her danger is Simply Royal but she is not sure to see out the distance which makes Wind Chill a banker in all bets.

If Wind Chill is not your banker, Simply Royal and Girl On The Run are your only dangers. I ride Sabina’s Dynasty who is not well handicapped and is held on current form as well. Hopefully she can run into the Quartet.

Race 11 is the Gold Bowl which is quite a difficult race to assess. Arguably the best horses have not had the best preparation leading into this race. There are others who have been racing and are super fit and they are Just Cruise In and Kitty’s Destiny. Their dangers should be Cool Chardonnay, although he has not raced since January.

The other danger has to be Let It Rain who I rode last time and would love to have ridden again. That run was his first start off a rest and the 2000m was too short for him. Unfortunately he had a very tardy start and the race just didn’t work out for him as I was caught wide around the bend. Even though he was well beaten on previous form he is a possible winner today.

Race 12 is a handicap with the majority of the runners having winning chances. My main selections are Count Tassilo, Finchatton, Shukamisa and Tilbury Fort. I ride Macduff who is held on his last run but could quite easily surprise.