The members, wielding a memorandum, want Van Schoor to "pay back the money", adding that they now know where he lives. 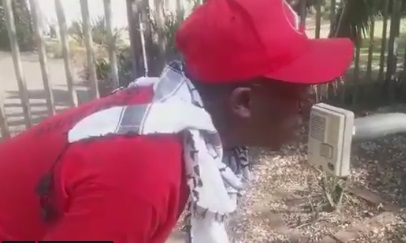 The EFF are demanding answers for UJ's missing R 14million.

In a video posted on their social media page, the party, dressed in signature red regalia, camped outside the former UJ finance vice-chancellor’s home to hand over a memorandum of demands.

In the video, one of the EFF members speaks on the intercom demanding the professor pay back the 14 million rand.

It is unclear if there was a respondent on the intercom, but the EFF member demanded the professor come out. He states the neighbors’ attention was now on him, and that the professor must come out to collect the memorandum.

The EFF member, who is only identified as Julius, stops talking on the intercom after being cued by the person recording the footage.

Van Schoor and Professor Roy Marcus are accused of using fraudulent invoices to direct funds intended for UJ upgrades and projects to companies linked to them personally.

Marcus and Van Schoor have denied the allegations that they stole more than R14 million from the institution, and are taking the university to court for damages.

The duo have launched an application to the South Gauteng High Court in Johannesburg, which will kick start another trial in a quest to clear their names.

Both Van Schoor and Marcus have not opposed an application for damages brought against them by UJ at the South Gauteng High Court, which the university plans to use in recovering the missing millions.

We are outside Jaco Van Schoors home demanding that he #PayBackTheMoney to UJ…. pic.twitter.com/1GGXdtj1h9