Two rhino calves found near the carcasses in the southern Kruger National Park near Malelane were moved to a nearby rhino sanctuary. Sanparks environmental crime investigators with a rhino carcass that was poached in the Malelane section of the Kruger National Park, 21 August 2018. Picture Neil McCartney

The white-backed vulture hung almost perfectly motionless in the pale blue African sky above the Malelane landscape baking in the late morning sun and, with a barely perceptible flick of its great wings, floated down to tear another chunk off the rhino carcass.

There’s little competition as it’s one of four white rhinos discovered in the past two weeks, killed and dehorned mere kilometres from a ranger station.

One rhino was killed 800m from a main road in the park, while the furthest killing was close to the western border fence of Kruger National Park (KNP) in Mpumalanga.

This shows how poachers change their tactics in response to crackdowns by rangers. Each time the rangers plug a gap, the poachers exploit another, said South African National Parks environmental crime investigator Frikkie Rossouw. 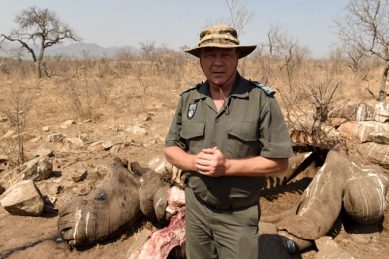 Malelane is an area in the park which has been relatively free of poaching. But with rhino becoming more and more scarce due to translocation and poaching, the illegal hunters are having to work harder.

Rossouw suspected the poachers may have been dropped off inside the park due to the proximity of the rhino to the road, and that all four rhino were killed by the same group. They might have left the park on foot, he added.

Part of the solution to poaching was to erect hangars for the airwing at Phalaborwa and Malelane.

Part of the problem was that there is no pilot at Malelane. The vacancy has not been filled, said SANParks spokesperson Ike Phaahla.

“Nicholas Funda used to be the chief ranger and he was moved to become chief conservation officer,” Phaahla said. “He’s now being moved back to chief ranger and hopefully some of the gaps which appeared during his absence will be addressed.”

Rossouw said two rhino calves found near the carcasses were moved to a nearby rhino sanctuary.

He won’t confirm numbers, but said there had been a “definite” decrease in poaching this year.