The roof which partially collapsed.

“A health disaster is waiting to explode. Filthy and broken toilets, wood borers in the building, broken ceilings and furniture are just some of the concerns and challenges the community of Merebank and staff of the clinic are greeted by every morning.”

These are the chilling words of a disgruntled member of the Merebank Clinic who claimed “enough is enough” and for far too long, their concerns have been swept under the carpet, Rising Sun Chatsworth reported.

Staff members of the Merebank Clinic are working under hazardous, dangerous, and unhealthy working conditions.

“The roof had partially collapsed causing white ants to roam around, lights are not working and toilets are out of order,” claimed a fuming Yusuf Vawda, who was fighting a lone battle. 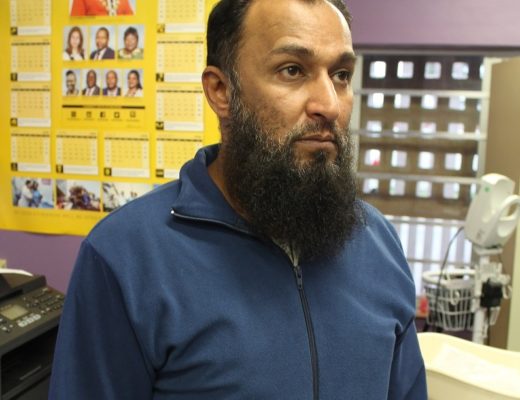 More than 200 patients visit the clinic on a daily basis and are forced to receive treatment under hazardous conditions.

The community, together with a member of the clinic committee, urge the municipality to come to their aid.

Vawda, also a clinic committee member, claimed: “The ceiling of the clinic fell, which the manager had complained about and had reported about six months ago. To date, the matter has not been addressed. Patients are coughing and sneezing together with their babies.

“The manager and staff of the clinic assisted patients by giving masks to them. The staff at the clinic worked effortlessly to assist the patients who were seated at the time. Patients who come into the clinic are always greeted by the broken ceilings and the wood borers falling onto the desks and floors. The state of the ceiling was reported to the maintenance department in February and nothing has been done about it.”

He said a wellness day was planned for Saturday, but due to the unsightly surroundings, the function was cancelled.

“However, on a more positive note, I would like to place on record that the staff and manager on duty assisted the patients who had been affected under those conditions. The department of health should not take this lightly. They are fortunate that no one was injured when the ceiling collapsed.”

Vawda further claimed: “The crucial problems are the roof and toilets. Patients are currently using the toilets that nurses use because the public toilets are out of order. The community will highly appreciate if the municipality intervenes to address these burning issues.”

Ntombi Ngubane, manager of the clinic, said she was not allowed to speak to the media.