PICS: How your stolen vehicle disappears … and the men trying to stop it

Chances are it was guided through veld in the late hours of the night to illegally cross the border into Mozambique, never to return. 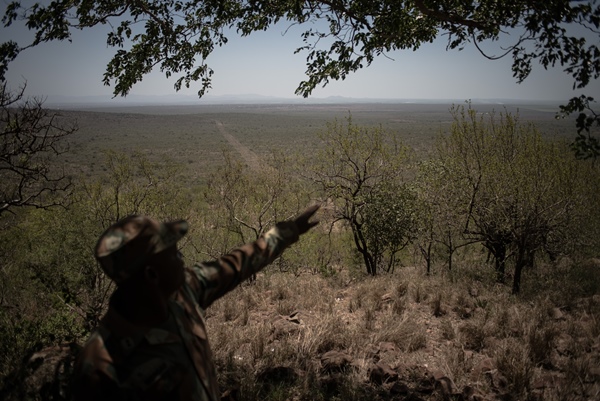 Ever wondered what happened to your stolen Toyota bakkie or Ford Ranger after you were held up in a hijacking?

Chances are it was guided through a veld in the late hours of the night to illegally cross the border into Mozambique, never to return.

At least 17 vehicles have been recovered at the Mozambique border near Komatipoort since the end of September. Most of these vehicles were Ford Rangers and Toyota Hilux, Fortuners and Land Cruisers.

But how do they do it? 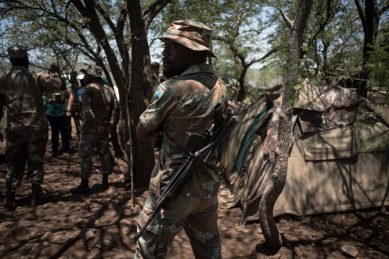 An SANDF soldier is seen at a base camp near the Mozambican border, 15 November 2018, Mpumalanga. Picture: Jacques Nelles

According to the South African Defence Force (SANDF), which monitors and guards SA’s borders, a syndicate breaks up into teams to try and outsmart the armed soldiers on patrol.

A syndicate of about three men divide themselves into a driver and two guides.

Once the car is stolen in South Africa, the vehicle is prepared to be illegally crossed over the border, said company commander at the Macadamia military base in Komatipoort, Major Marvin Manganye.

“At night, they prepare the vehicle after it has been stolen. They remove the brake lights by either cutting the wires or removing, or shattering the light bulbs. This is so that we don’t see them, even from a 10km distance,” Manganye explained. 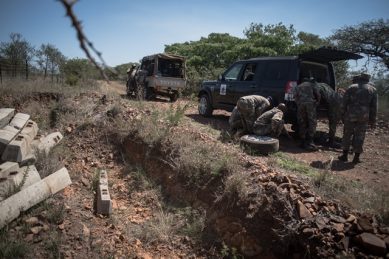 SANDF soldiers are seen changing a flat tire along the Mozambican – South African border during a patrol. The harsh terrain they travel through on a daily basis is one of the many challenges they face when protecting the South African border, 15 November 2018, Mpumalanga. Picture: Jacques Nelles

Operating mostly at night to avoid being seen, the stolen vehicle is stationed in a garage or hidden in the veld while the dashboard is covered in plastic to prevent any instrument cluster lights shining through.

In the meantime, one of the guides then goes to check if the route to be used is clear of any law enforcement or soldiers.

The syndicate normally moves through the small Dludluma village just outside Komatipoort towards the border, passing through a gate in the village going to the fences. 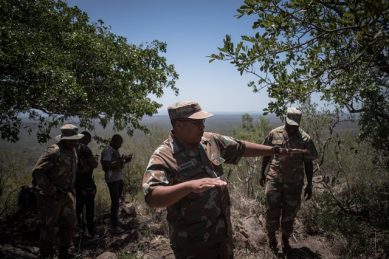 Brigadier General Mafi Mgobozi is seen at an observation area at a base camp near the Mozambican border, from where soldiers can see stolen vehicles approaching the border. This area is a hotspot for illegal vehicle crossings, 15 November 2018, Mpumalanga. Picture: Jacques Nelles

“Then there are the guides. The guides prepare the route for the car to cross the border. They also use observation posts to check on our movements and to make sure their route is clear. They will then go back to fetch the driver with the car from where it’s stationed.”

On foot, the two guides walk in front of the stolen bakkie, guiding the driver through the mountainous and rocky route towards parts of the fence that had previously been broken by the syndicates.

Parts of the 60km of Mozambique border fence are cut but as a solution, SANDF members dug deep holes adjacent to the broken parts of the fence, to prevent the vehicles from passing through.

But the number of stolen vehicles making it to Mozambique has decreased, Manganye said.

Since September, more than R5.8 million worth of vehicles have been recovered attempting to cross the border.

Almost all of the recovered vehicles are found damaged and dented as the thieves often crash the bakkies when trying to escape from soldiers. 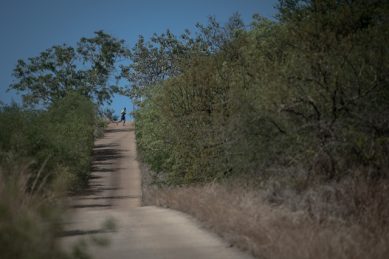 An illegal immigrant can be seen running into the bushes after illegally crossing into South Africa through a damaged section of the South African – Mozambican border fence, 15 November 2018, Mpumalanga. Picture: Jacques Nelles

“Those guys hardly operate during the day, so we sleep with one eye open. Meaning some of our guys are sleeping while others check and patrol. These syndicates work according to our operation and our movements. Sixty percent of them are Mozambican, while 20% are eSwatini nationals and the remainder are South African. ”