Cosatu's Bongani Masuku has been cleared of hate speech charges following a political statement he made in support of Palestine. 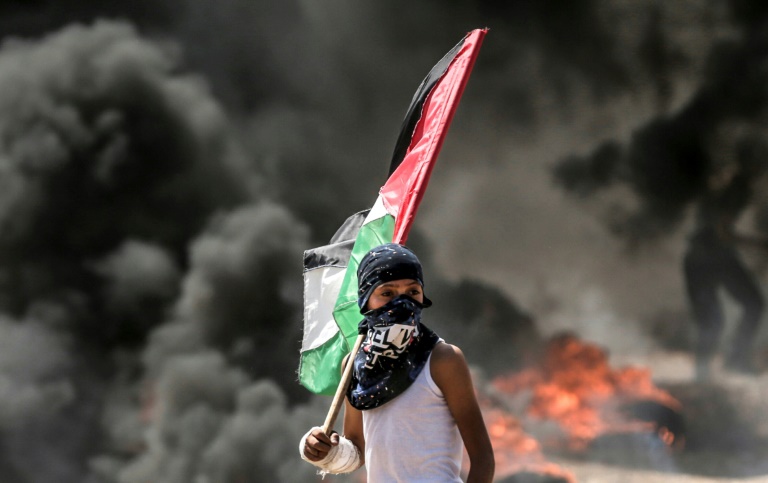 A Palestinian boy holding his national flag looks at clashes with Israeli security forces near the border between the Gaza Strip and Israel east of Gaza City. Picture: AFP / Mahmud Hams.

The Supreme Court of Appeal (SCA) this week delivered a judgment that provided much-needed clarity about the meaning of “hate speech” as prohibited in the Equality Act. Understanding what constitutes hate speech is crucial to properly protecting and promoting the right to freedom of expression. Besides being a fundamental human right in section 16 of the Constitution, freedom of expression has been described by the Constitutional Court as “a guarantor of democracy”.

The dispute arose in February and March 2009, but was prompted by the military action against the Gaza Strip by the Israeli government at the end of 2008. The conflict resulted in more than 700 deaths. The violence received worldwide attention.

At the time, Bongani Masuku was a high-ranking COSATU official. The trade union condemned the actions of the Israeli army, ran a campaign to that effect, and even held a protest march to the headquarters of the SAJBD and SAZF alongside the Palestine Solidarity Committee. Their aim was to put pressure on the South African government to support Palestinian people in the midst of the escalating conflict.

During this campaign, Masuku wrote on an online blog: “We struggle to liberate Palestine from the racists, fascists, and Zionists who belong to the era of their Friend Hitler! We must not apologise, every Zionist must be made to drink the bitter medicine they are feeding our brothers and sisters in Palestine. We must target them, expose them and do all that is needed to subject them to perpetual suffering until they withdraw from the land of others and stop their savage attacks on human dignity.”

A few weeks later, at a gathering at Wits, Masuku made further comments to the effect that “COSATU has got members here on this campus. We can make sure that for that side it will be hell” and that “the following things are going to apply: any South African family […] who sends its son or daughter to be part of the Israeli Defence Force must not blame us when something happens to them with immediate effect… [COSATU] will do everything to make sure that whether it is at Wits, whether it is at Orange Grove, anyone who does not support equality and dignity, who does not support the rights of other people must face the consequences even if we will do something that may necessarily be regarded as harm”.

The SAJBD laid a complaint of hate speech with the Human Rights Commission who found in their favour and referred the matter to the Equality Court who, in turn, found the statements to be hate speech in terms of the Equality Act. Masuku was ordered to apologise unconditionally “to the Jewish community”.

But what is hate speech and how does it find a place within the fundamental right to the freedom of expression? Section 16 of the Constitution excludes from freedom of expression advocacy of hatred that is based on race, ethnicity, gender, or religion and that constitutes incitement to cause harm. To be an unprotected form of speech, the statements must be aimed at a group based on their race, ethnicity, gender, or religion and must incite harm.

As the SCA pointed out, the Equality Act, on the face of it, appears to have a broader definition of hate speech. Apart from significantly broadening the groups that are protected from hateful statements, the Act prohibits speech that could reasonably be understood not only to “be harmful or incite harm or promote or propagate hatred”, but also “to be hurtful”.

This is cause for concern, the SCA said this week, precisely because the right to freedom of expression is so fundamental to a democracy and should not lightly be limited. It referred to a Constitutional Court statement of 2016 that involved Fees Must Fall student activists.

“A court should not be hasty to conclude that because language is angry in tone or conveys hostility, it is therefore to be characterized as hate speech. Even if it has overtones of race and ethnicity,” the Constitutional Court wrote.

So, did Masuku’s statements incite harm against a particular race, ethnicity, gender, or religion? The Equality Court said because Masuku aimed some of his comments at “Zionists”, and because most people who are likely to support Zionism, are Jewish, the statements were in fact directed at people of the Jewish religion or ethnicity.

Masuku said this was not the case; his statements were directed at the State of Israel. The fact that most people who support Israel’s conduct may be Jewish, does not mean that he is attacking all Jewish people simply because they are Jewish.

In deciding this matter, the SCA considered the meaning of “Zionism” and whether it can, in effect, be seen as a synonym of the word “Jew”. Both sides called various expert witnesses to address this question. On the basis of such evidence, the court found that the term Zionism refers at its core to support of a Jewish State in the Middle East. The term refers to a group of people that share a particular view, even a particular political view, which is not the same as, for example, the term “Jew” that clearly depicts a particular religion or ethnicity.

“The furthest one can take the matter”, the SCA found, “is that because very many Zionists are Jewish and very many Jews may be Zionists, the two concepts may in some circumstances become blurred if care is not taken to distinguish between them.”

In deciding whether the statements incited harm, the court considered the context within which the statements were made. Masuku’s comments on the blog post followed some seriously inflammatory statements from supporters of Israel. One posted: “Even when all the monkeys in Cosatu have died of Aids (even those who were cured by raping babies), I still wont [sic] return [to SA]. Jews should be in Israel supporting Israel – Friends – make Aliya! Do it!”

The statements at WITS were made at an annual event called “Israel-Apartheid week”. A small group of Jewish students were present and heckled Masuku throughout his speech, including shouting “Heil Hitler!” at Masuku before he had made any offensive statements.

Within this context and from the actual transcript of events, the court found that Masuku’s speech never became anything more than a political statement in support of Palestine. While it may have been offensive and hurtful, it did not incite harm.

“The fact that a particular expression may be hurtful of people’s feelings, or wounding, distasteful, politically inflammatory, or downright offensive, does not exclude it from protection,” said the court.

Before concluding, the court paused to comment on the treatment of the expert evidence of Steven Friedman, then a professor at the University of Johannesburg, who testified as a witness for Masuku. Friedman and two expert witnesses called by the Human Rights Commission all testified as to the difference between “anti-Zionism” and “anti-Semitism”.

While this expert evidence was not central to deciding whether Masuku’s statements were hate speech, the SCA wanted to express itself on the attitude of the Equality Court towards Friedman. The lower court found that Friedman could not convince it that he was an expert on issues of anti-Semitism and anti-Zionism because, despite having an “immense interest” in the topic, it was not the focus of his academic career and he was partisan because he had previously supported some campaigns to boycott Israel.

The SCA had no time for this approach by the Equality Court, not only because Friedman’s activism on its own could not be used to consider his evidence biased, but also because an expert produced by the Human Rights Commission, David Hirsh, was a member of a UK activist group called Engage that mobilised against boycotts of Israel. Yet the Equality Court had found no reason to doubt Hirsh’s evidence, even though it questioned Friedman’s credibility.

In upholding Masuku’s appeal against the Equality Court judgment, the SCA said:

“Public debate is noisy and there are many areas of dispute in our society that can provoke powerful emotions … Nothing that Mr Masuku wrote or said transgressed [the boundaries of constitutional protection], however hurtful or distasteful they may have seemed to members of the Jewish and wider community. Many may deplore them, but that does not deprive them of constitutional protection.”

SAJBD  released a statement on Facebook, which can be read below.

Posted by South African Jewish Board of Deputies on Tuesday, 4 December 2018

Originally published on GroundUp. Comment from Cosatu and SAJBD has been added.