Three bodies retrieved from bakkie that plunged off cliff

Three men from Groot Brak River died yesterday when the bakkie they were travelling in plunged down a cliff in the Mossel Bay area of the southern Cape. 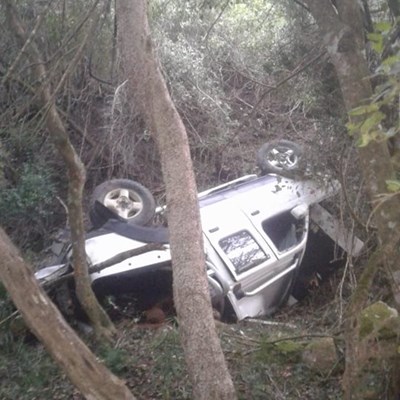 The bodies of three men who fell to their deaths yesterday after plunging off a cliff were freed on Sunday during a complicated retrieval operation.

The deceased, two residents of Groot-Brak River and one from Blanco, were trapped in their bakkie from about 3pm yesterday.

The police suspect that the driver lost control and left the Kleinplaas road at about 3pm to fall about 100m before coming to a stop in an overgrown area. The police said the scene was difficult to reach and an emergency services helicopter had to be used to retrieve the bodies.

The driver was in his forties and the other two fatalities were, respectively, 18 and 26. A case of culpable homicide was being investigated.

Although the families were informed about the accident, the police had not yet made the identities of the victims public.

It’s understood they were travelling to a 60th birthday party.

About 30 rescuers participated in the operation. The bodies were taken to the local mortuary, where families would do the identification.

– This article was translated from Afrikaans from the Mossel Bay Advertiser