Eleven livestock ships from Romania, five from Spain, two from South America and four on their way to the canal are stuck in the logjam. 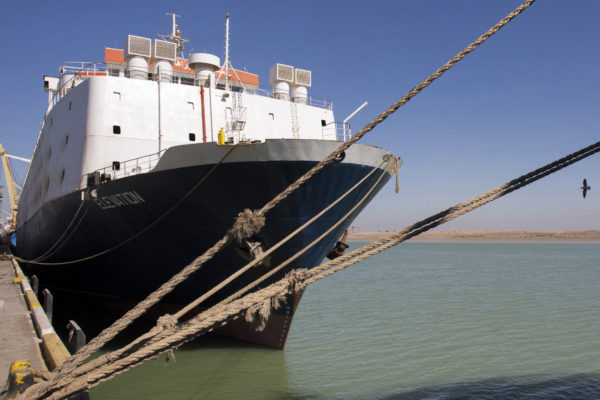 The Elevation, which departed from Basra's Umm Qasr, is one of several ships waiting in the Gulf of Suez due to the impasse created by the MV Ever Green, which has remained wedged sideways blocking navigation in the Suez Canal since March 23. Picture: Hussein FALEH / AFP

Among the hundreds of cargo ships stuck at entrances to the Suez Canal are at least 20 vessels with live animals on board.

It is not yet clear what the animals’ current state of welfare is, or whether further delays would result in them suffering from starvation or dehydration.

Information received from NGO Animals International confirmed that 11 livestock ships from Romania, five from Spain, two from South America and four on their way to the canal were stuck in the logjam.

This is after the MV Ever Given container ship, which is longer than four football fields, wedged itself diagonally across the canal last Tuesday.

AFP reported last week each day of the blockade has cost the global economy between $6 and $10 billion (R90 billion to R150 billion). An aerial view taken on March 27, 2021 from the porthole of a commercial plane shows stranded ships waiting in queue in the Gulf of Suez to cross the Suez Canal at its southern entrance near the Red Sea port city of Suez, as the waterway remains blocked by the Panama-flagged container ship MV Ever Given, which has remained wedged sideways about 6km north of the canal’s entrance impeding all flowing traffic since March 23. Picture: Mahmoud KHALED / AFP

Ships stuck in the queue must now make the call whether to wait until the Ever Given is moved, or divert around Africa, which could add 9,000km to their journeys.

Animals International said marine traffic sources claim 26 vessels to be “laden” with livestock cargo, but the NGO is not yet sure if this is true.

South American livestock vessels Nabosli and Nada are also carrying livestock, but Nada may not be impacted.

There are also at least four vessels waiting to enter the canal from the south – Abduallah, Elevation, Maysa and Freedom.

Spain’s agriculture department was quoted in The Guardian on Friday confirming no additional livestock will be loaded onto ships until the canal is reopened.

Although salvage teams are attempting to dig around the ship to help it move, former Egyptian admiral Talaat el-Bannane said the ship was trapped at a part of the canal which was rocky. Too much digging could result in earth collapsing onto the ship, he warned.

The ship first began to move on Saturday. Since then, Egypt’s Suez Canal Authority said the ship had turned 80% in the right direction on Monday.

The ship’s best chance to reposition itself in the middle of the waterway would be to wait until the water flow increases.

Once the ship is refloated, it will take three-and-a-half days to clear the traffic jam, Egyptian authorities said.