According to the SIU, Mkhize's son allegedly benefited R3.8 million from the Digital Vibes contract. 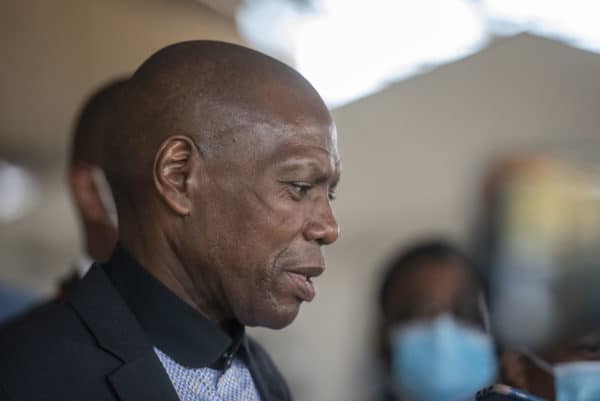 This is after the Special Investigating Unit (SIU) filed a 90-page affidavit to the Special Tribunal last Thursday.

The SIU is seeking to review and set aside the multimillion-rand tender awarded to Digital Vibes, a company purportedly owned by Mkhize’s close associate Tahera Mather.

The investigating unit listed 20 people – including Mkhize and his son – who received around R90 million from the R150 million contract.

‘None of the monies exchanged connected to tender’

According to the SIU, Mkhize’s son allegedly benefited to the tune of R3.8 million from the contract, which Dedani disputed in a lengthy Facebook post.

In the post, Dedani slammed the SIU’s conduct during its investigation, saying that he only found out via the media that the unit had recommended that the National Prosecuting Authority (NPA) consider charging him for corruption over “suspicious payments” he received from Digital Vibes.

“I am shocked to say the least that the SIU has not yet bothered to serve me or my lawyers with the court papers it has decided to file.

“I have had to learn through a media article of all the goings of an investigation I am supposedly a part of and their efforts to recover R3.8 million that I have never ever received,” he said.

Dedani claimed that the money he received from Mather was not connected to the Digital Vibes contract.

“Our relationship dates back to 2015. None of the monies ever exchanged between myself and Tahera Mather have been connected to the Digital Vibes contract with the Department of Health.

“It is unfortunate to find myself entangled in a saga I know nothing of. It is highly presumptuous to inadvertently suppose that any past financial exchanges with Tahera Mather have a bearing on the contract in question,” he said.

He reiterated that he did not benefit “a cent” from the Digital Vibes contract.

“To assume that past financial exchanges mean I benefit in her business dealings (by virtue of being her friend) seems to be a desperate attempt to sensationalise matters,” Dedani said.

Dedani further accused the SIU of being “unprofessional” and “biased” in its investigation.

“I am concerned and disappointed in the manner in which the SIU has dealt with me following its investigations in the Digital Vibes and Department of Health contract saga.

“To say that its dealings have been nothing short of unprofessional and biased would be an under statement. Frankly, the SIU report relies on media reportings – not a tested legal process,” he added.

The SIU, however, has since dismissed Dedani’s claims.

“The SIU would like to place it on record that Mr Mkhize made written submissions, which were thoroughly considered as part of the investigation. It can therefore not be true that he was not afforded an opportunity to be heard.

“Mr Mkhize is cited as a respondent in the papers before the Special Tribunal and he will have a further opportunity to explain circumstances under which the money was exchanged with Ms Mather. The outcomes of all our investigations are evidence based. We are therefore rejecting Mr Mkhize’s comment that we have made a predetermination on the matter,” SIU spokesperson Kaizer Kganyago said.

The Sunday Times has also reported on money-laundering allegations involving Mkhize’s son, which was included in the SIU’s affidavit.

This also allegedly included cash in plastic bags and cardboard boxes which was given to Dedani by a petrol station manager who was registered as the owner of Digital Vibes, according to the publication.

This was done after Digital Vibes allegedly recruited a cash-‘n-carry owner to help launder the contract’s monies.

Daily Maverick’s investigative unit, Scorpio, previously revealed that Digital Vibes purchased a second-hand Toyota Land Cruiser for Dedani around the same time the Department of Health transferred about R50 million to the company for its services.

It has been almost a month since President Cyril Ramaphosa received the SIU’s final report on the matter, but he insists that he is still studying it and has appealed for space.

Mkhize is on special leave, pending the finalisation of the investigation.

The minister is accused of putting pressure on the Department of Health to hire Digital Vibes and benefiting from R6,720 in repairs to his home, which was paid for by the company.

Mkhize has maintained his innocence in the scandal, saying he did not personally benefit from the contract even though his family could have.