ANC says IEC was asleep at the wheel, after changing its own mind

The major parties in SA are telling the Constitutional Court why are they for or against an unconstitutional electoral delay. 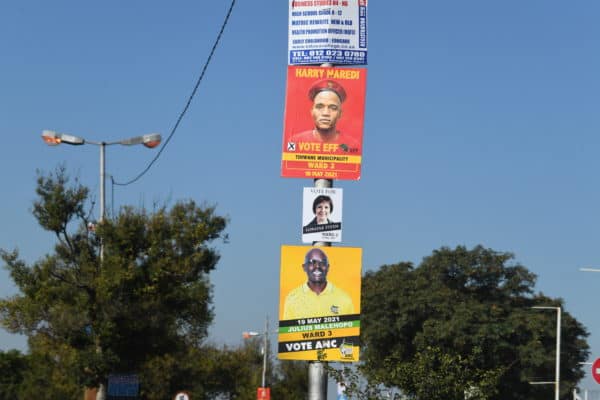 A general view of local elections campaign posters on May 10, 2021 in Pretoria, South Africa. The South African municipal elections will be held on the 27th of October 2021, to elect councils for all district, metropolitan and local municipalities in each of the country's nine provinces. Picture: Gallo Images/Lefty Shivambu

The Constitutional Court (ConCourt) was hearing argument on Friday from the parties involved in the Independent Electoral Commission’s (IEC’s) application to have the elections postponed to February next year.

Counsel for the African National Congress (ANC), Anthony Stein, appeared before the ConCourt’s full bench to argue that the IEC should’ve woken up earlier to the importance of seeking the postponement of the local government elections.

“The IEC is to blame. They should’ve woken up earlier. That is the essential course of the challenge. But the issue is not a question of blame. It’s a question of the possibility of the fairness of the election at this state,” he said.

This is despite the ANC previously indicating that the elections “must” be held in October as scheduled.

However, the ruling party also expressed support now for a postponement.

The Democratic Alliance (DA) argued that the ConCourt granting any order would, however, strip the Constitution of its supremacy.

The DA, alongside the DA-led Western Cape government, is opposing the IEC’s application.

Ismail Jamie, representing the provincial government, echoed Du Plessis’s arguments, saying the postponement of the elections posed a threat to the Constitution.

Meanwhile, counsel for the Economic Freedom Fighters (EFF), Mfesaneka Siboto, said the party was still in support of the postponement.

EFF leader Julius Malema had previously said that political parties were constrained in conducting their campaigns, particularly in efforts to encourage the youth to vote, among other reasons.

The Inkatha Freedom Party (IFP) has proposed that the elections be postponed to May 2022 so that at least the majority of the people who will vote can be vaccinated.

Earlier during the proceedings, counsel for the IEC advocate Wim Trengove made his arguments, where he said a free and fair election on 27 October would be impossible.

Trengove said the IEC was seeking a remedy or relief by approaching the ConCourt rather than pursuing a constitutional amendment.

However, Justice Steven Majiedt questioned why the IEC did not approach Parliament to obtain the relief that the commission was seeking from the apex court.

Majiedt also pointed out that South Africa would be the first country to postpone elections due to the Covid-19 pandemic.

Trengove, however, argued that the IEC was avoiding the action of taking the law into its own hands.