The 53 self-described veterans are currently facing one count of conspiracy to kidnap and 26 counts of kidnapping. 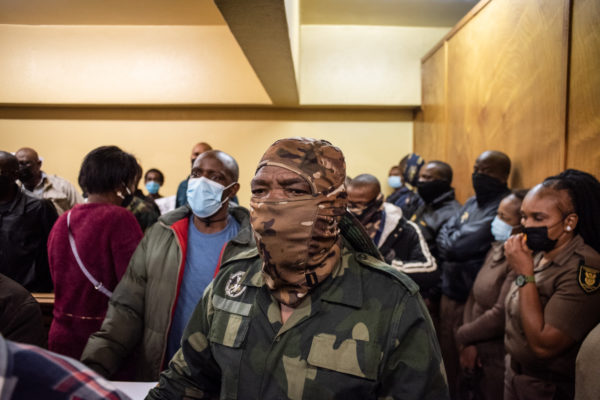 Eleven purported military veterans who were arrested and charged after the hostage drama involving three government ministers are expected to return to court on Friday for their bail hearing.

They are part of a group of 53 suspects who were arrested last Thursday after they held Defence and Military Veterans Minister Thandi Modise, her deputy Thabang Makwetla and Minister in the Presidency Mondli Gungubele against their will at St George’s Hotel in Irene, Centurion, following a meeting to address their grievances.

Forty-two of the 53 suspects, from an organisation called the Liberation Struggle War Veterans (LSWV), were granted R500 bail each on Tuesday by the Pretoria Magistrates Court sitting in the Kgosi Mampuru Correctional Service.

The 53 suspects are currently facing one count of conspiracy to kidnap and 26 counts of kidnapping.

The case was postponed to 1 February 2022 for the 42 veterans that were released on bail.

The bail application of the remaining 11 was postponed to Friday. The state revealed that the accused had previous convictions which included murder and robbery.

According to the state, it is alleged that on 14 October a meeting was arranged between the ministers and other delegates from the Presidency, together with 10 representatives from the LSWV.

When the meeting started, Gungubele chaired the meeting and informed everyone in attendance that Deputy President David Mabuza was not available for the meeting, and asked if they wanted the meeting to proceed.

It is alleged that the suspects informed the minister that they would not engage in any discussion without the presence of President Cyril Ramaphosa or Mabuza.

Gungubele then decided to adjourn the meeting and asked everyone present at the meeting to leave the venue.

At this point, it is alleged that a group of people stormed in and closed the entrances of the venue and barricaded the doors with chairs. They apparently told the ministerial delegation that no one would leave until Ramaphosa or Mabuza comes to address their issues.

The 26 delegates were kept in the venue for three hours before they were later released after the South African Police Service’s Special Task Force rescued them and apprehended the 53 purported military veterans.