The perpetrators can be seen loading items from the van into their silver sedan. 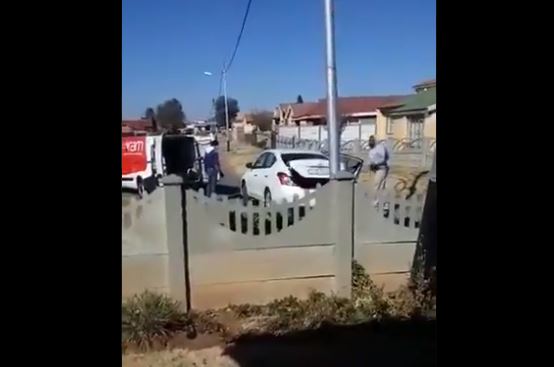 Footage showing about two men targeting a delivery van has surfaced, also highlighting the extreme state of shock the woman behind the recording was in.

While on a call to provide police with information, the woman spells out the robber’s license plate number, FJ40FL GP, before pleading with law enforcement officers to hurry.

The perpetrators can be seen loading items from the van and into their silver sedan.

The footage comes after reports of a number of delivery trucks being targeted.

In January, police opened cases of hijacking and theft after a RAM courier vehicle was robbed of cellphone packages, in Kempton Park, while another was also targeted not far from the first one.

Police spokesperson Mathapelo Peters, responding to one of the attacks, said the suspects approached a 58-year-old driver and passenger who were seated in the vehicle parked near Knorr-Brense on Derrick Roads in Kempton Park with guns and instructed them to get out.

The suspects took off with the vehicle loaded with packages meant to be delivered.