Kesavan Isaac Naidoo was shot in both legs but survived the attempted hit. 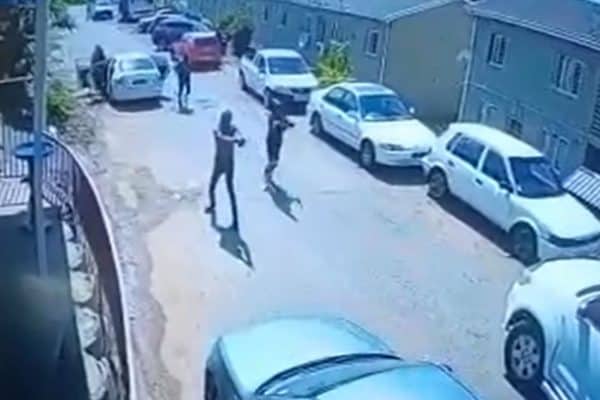 The son-in-law of Yaganathan Pillay - also known as Teddy Mafia - was shot twice in an attempted assassination in Shallcross on Wednesday. Picture: Screengrab from video

CCTV footage of the incident shows three men getting out of their car and running towards a Toyota Fortuner while firing their guns. The Fortuner then drives away and the three gunmen run towards their getaway car.

“Isaac [Naidoo] was shot in both legs and his driver was shot in the hand. Both of them survived. They’re in hospital,” he said.

Teddy Mafia was killed when he was shot twice in the head while standing outside his home in Shallcross in January.

In extraordinary scenes of violence, the two hitmen were then shot, stoned and beheaded. They were then set on fire by community members.

Pillay also made headlines in May 2020 when he was given a police escort home after being released from jail.