'We're poor families who have unemployed graduates while we deserve to be recognised and catered for the same way as the children of other struggle stalwarts.' 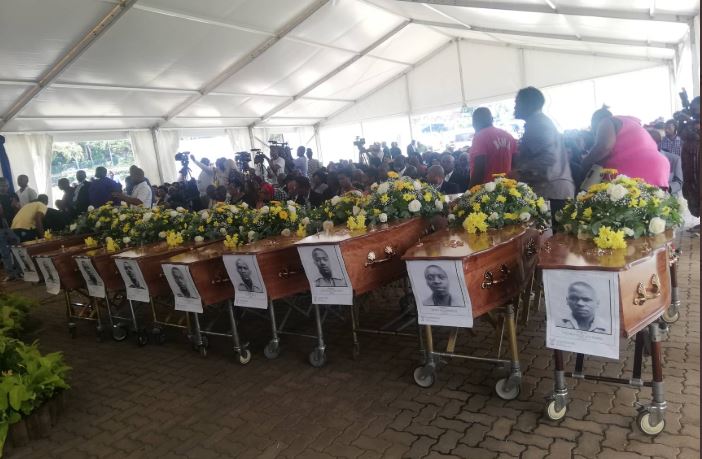 The remains of the Cato Manor 9, who were hanged in 1961, were buried in the presence of their families in Durban, 24 January 2020. Picture: Twitter / Department of Justice

The families of the Cato Manor 9 should be treated “on the same level” as the struggle heroes of Sharpeville and other children of struggle stalwarts.

“We’re poor families who have unemployed graduates while we deserve to be recognised and catered for the same way as the children of other struggle stalwarts. Cato Manor gave birth to Sharpeville. The reason they were shot (the Sharpeville massacre victims) is because they were chanting Cato Manor,” Musa Khuzwayo told Justice and Correctional Services Minister Ronald Lamola.

The apartheid regime hanged the nine on September 5, 1961 after they were accused of the murder of nine apartheid police officers in the then Cato Manor informal settlements in Durban.

The apartheid government buried them as paupers in cemeteries in and around Tshwane.

Speaking on behalf of his family and the committee, Khuzwayo suggested that the family of former president Nelson Mandela received special treatment from the democratic government.

“Things are not done equally. It was in the same struggle [that] they were fighting. All freedom fighters’ families need to be treated the same. Mandela’s children are given benefits and other families are overlooked. Mandela’s children don’t even have to produce CVs when they are looking for jobs. We can’t be called children of the heroes while we’re not being taken care of,” he told reporters outside the marquee where the ceremony took place.

Khuzwayo also said the Sharpeville massacre would not have happened if the people of Cato Manor, including the nine deceased, had not taken a stand against the apartheid regime.

Makhe Miya, who spoke on behalf of the family of Silo Mhlabelwa, shared his sentiments.

“They were the first to be hanged during those years of turmoil but they are not properly recognised. Their families and children are very poor. Their children did not even get a chance to get a proper education because they left them when they were still young,” he said.

Miya told Lamola that the apartheid government had the incorrect name for Mhlabelwa, adding that he was documented as Sililo Miya.

Despite their complaints, the families agreed that they “found closure” after their relatives received proper burials.

“We’re emotional but happy that finally we have closure now that their remains would be buried with the respect and dignity they deserve. We’re happy that we now know where their resting places are,” said Bonginkosi Khuzwayo, who spoke on behalf of Msayineke Daniel Khuzwayo’s family.

Lamola told the families that his department administered an education fund that catered for qualifying families of the victims of the apartheid government. He said the fund included money for bursaries and human settlement funds.

He said he was sure that they would qualify and would be assisted through such funds.