Lesufi said the department was working on an intervention plan beyond the coronavirus for the homeless. 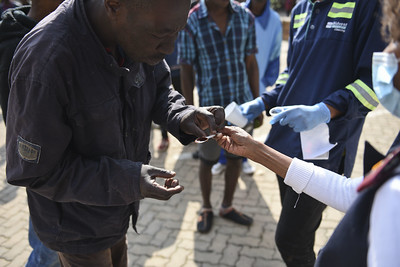 Homeless people and addiction sufferers receive medication from a nurse at a shelter, 14 April 2020, at the converted Hofland Park Recreation Centre in Bezuidenhout Valley during the coronavirus pandemic. The nurses, who form part of South African National Council on Alcoholism, are attempting to curb the spread of the coronavirus while healing recovering addicts. Picture: Michel Bega

The government will be failing the homeless if it releases them back onto the streets post the Covid-19 lockdown.

This according to acting Gauteng Social Development MEC Panyaza Lesufi, who said the department was working on an intervention plan beyond the coronavirus for the homeless.

He was speaking to the media after receiving 2 600 12.5kg bags of maize meal from NPO Meal SA at the Tshwane food bank on Thursday.

“If you have to release them back onto the streets, I think we would have failed as the government and so we are trying to put proper systems in place to protect them, but most importantly re-skill them,” Lesufi added.

He said many of the homeless, who have been housed during the lockdown, requested assistance such as bursaries, and some were seeking to return to school.

Others have admitted to being addicted to drugs and want the department to assist them with rehabilitation, added Lesufi, saying it would be looking into all the requests to uplift their lives.

Thousands of homeless people have been housed in temporary shelters across the province since the start of the lockdown on 27 March.

News24 previously reported when the government started planning for the lockdown, it estimated there were 15 000 homeless people in the province, but the number spiked to more than 50 000, with 15 000 in Johannesburg and 10 000 in Tshwane alone.