Dlomo is known to be one of Zuma's most loyal supporters. In 2019, he was fired from the SSA following a number of corruption allegations levelled against him. 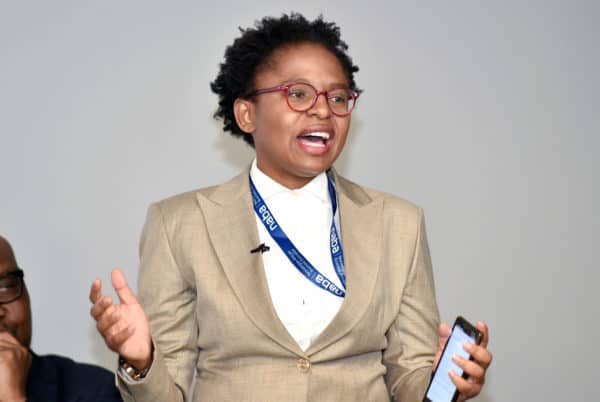 Acting Minister in the Presidency, Khumbudzo Ntshavheni, refrained from entering the fray regarding reports that former president Jacob Zuma’s ex-bodyguard, Thulani Dlomo, is one of the prime suspects that allegedly encouraged the looting and violence the country has witnessed over the past few days.

According to News24, it is alleged that Dlomo, who is the former head of a State Security Agency (SSA) special operations unit, is one of the 12 people who they believe to be the instigators of the public violence and are being investigated by the agency.

Zuma’s incarceration had triggered widespread riots, notably in KwaZulu-Natal and Gauteng, with the death toll from the riots in both provinces rising to 72. However, this number may be higher according to Ntshavheni.

Meanwhile, a total of 1748 people had been arrested as of Wednesday.

During media briefing on Wednesday, Ntshavheni refused to comment on Dlomo’s alleged role, saying the matter was before the SSA.

“On the allegations regarding Thulani Dlomo, they are matters of state security. The Department of State Security is handling [the matter] and we will leave it at that,” she said.

Police Minister Bheki Cele described the widespread looting as “a smokescreen”, saying the incidents seemed like “crimes against the state”.

“This thing of looting is a smokescreen. It’s far beyond that, in terms of criminality happening. So it does look like a crime against the state.

“Relevant structures then will have to work in that kind of proportionality to say people are attacking the state if they are organised and all that,” the minister told the media.

This is after the Independent Communications Authority of South Africa (Icasa) revealed that it had received reports that 113 network towers had been vandalised.

The protests have also caused a massive disruption to electricity and water infrastructure, among other essentials, in KwaZulu-Natal and Gauteng.

The widespread looting and torching of shops in both provinces has also left some areas without basic groceries.

‘Not taking this lightly’

Meanwhile, Deputy State Security Minister Zizi Kodwa said, in an interview with eNCA, that the SSA was not taking the allegations against Dlomo and others lightly.

ALSO READ: State of emergency SA: What this would mean for your rights

“There are a number of names that has been brought to us. We are looking at those former [SSA] members who probably reside around KZN or some areas who could be connected to this destabilisation.

“We don’t take that information and allegations lightly as an agency because you could see this operation is ran by people who have ran operations before,” the deputy minister said.

Kodwa, however, could not say when the suspects would be brought in.

“Last night in Maponya [Mall], which is a reason I went to Maponya, a number of people were arrested [and] they gave name of people who paid them to carry [out] a certain operations and they are now in the custody of [the] police,” he said.

In effort to to help quell the violence in KwaZulu-Natal and Gauteng, government has since requested at least 25,000 troops from the South African National Defence Force (SANDF) to be deployed.

Minister of Defence Nosiviwe Mapisa-Nqakula told the Parliament’s joint standing committee on defence on Wednesday evening that Ramaphosa was unhappy about the initial deployment of 2500 soldiers, with President Cyril Ramaphosa suggesting that more soldiers be deployed.