Despite previous reports, the fights are in the spirit of getting young boys to pour their energy into a constructive hobby. 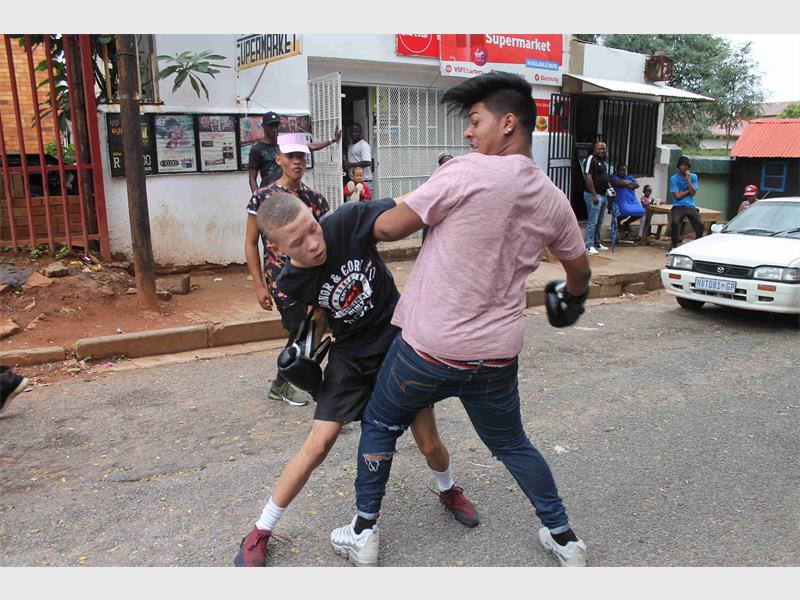 Timothy 'TJ' Fisher and Keshiv 'Kesh' Pillay going at it hammer and tongs, but under supervision. Photo: Riaan van Zyl.

After an article about a group of boys involved in alleged illegal street fighting, the Roodepoort Record was invited by organiser Steven Fisher to experience the events first hand.

Fisher explained that he organised the fights to give the boys an alternative to drugs and a life of petty crime. “What we need now is a hall or something similar. Any support would be welcomed,” pleaded Fisher.

Initially, reports on the fighting was blown out of proportion, with allegations about bare-knuckle fighting until the blood flows and betting by adults on the outcome. Later, a different story emerged.

First off, the youngsters, mostly in their teens, use boxing gloves. Bouts are five minutes long, divided into two rounds of 2.5 minutes per round. Fighters are searched beforehand for any dangerous items they might be hiding. Advice is given by Fisher, other adults and the fighters. It is also clear that the young men have received a degree of boxing training and skills.

Ironically, the fights, which take place in 5th Avenue, are only a hundred metres away from one of the hottest drug spots in Florida. In the opposite direction, illegal gambling takes place, and opposite the site of the fights is a well-known drug house. But the boys and Fisher are undeterred.

There is also great camaraderie among the competitors. They heed the referees calls to stop fights to attend to injuries and hug each other after the fights.

Almost all the boys tell tales of drug-taking and being involved in crime on the streets of Florida. All had the same things to say. “This takes me away from crime”, “It’s made me a better person”, and “It’s built my self-confidence” are just some of their positive statements.