The taxi driver could not avoid the giraffe which was crossing the road and struck the animal, killing it on impact. The tourists' vehicle on which a giraffe fell.

A minibus taxi hit a giraffe in the Kruger National Park (KNP) on Sunday, reports Lowvelder.

The animal then fell onto a rental vehicle, injuring two foreign tourists.

According to Ike Phaahla, spokesperson for the KNP, the incident occurred before midday between the Mopani and Shingwedzi rest camps.

The taxi driver could not avoid the giraffe which was crossing the road and struck the animal, killing it on impact.

There were 13 passengers in the taxi. 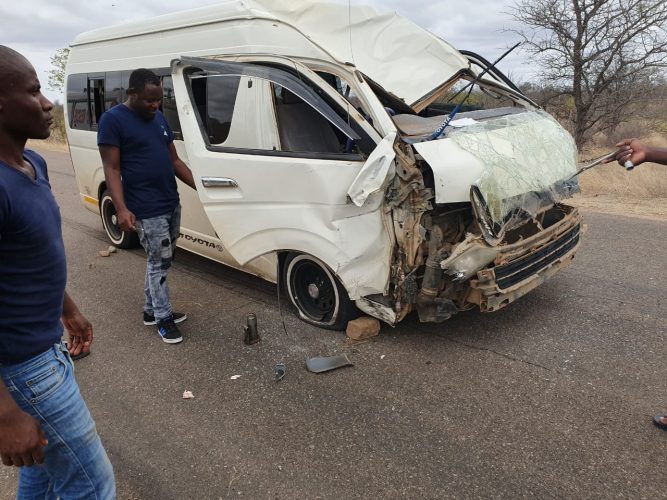 The minibus taxi involved in the accident.

The animal fell onto the rented bakkie, crushing the roof of the vehicle and critically injuring the elderly Swedish driver.

Both Swedish nationals were flown by helicopter to Mediclinic Nelspruit.

“The driver’s wife sustained minor injuries and is currently in hospital for observation,” Phaahla said.

The driver and two passengers in the minibus taxi sustained minor injuries.

The front of the taxi bore the brunt of the collision, with heavy damage shown on the photos found on the SANParks Twitter page.

SAPS will be conducting investigations and circumstances that led to the accident.

SANParks continues to warn visitors to the KNP to observe the speed limit and be careful on the roads.

Phaahla stated that the matter will be investigated by SAPS in order to determine if negligence on the part of either of the drivers contributed to the accident.