The details surrounding the cause of the accident is being investigated. 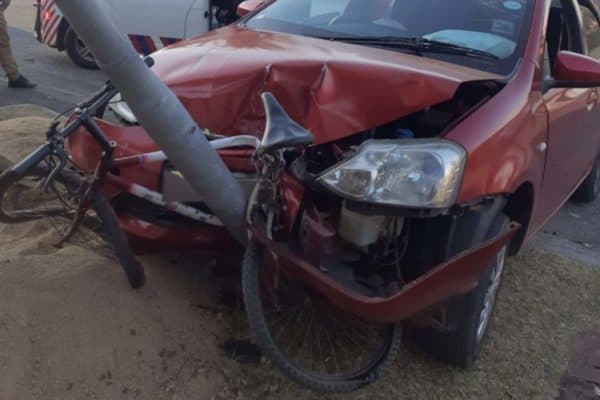 A 26-year-old male cyclist sustained critical injuries in a collision with a vehicle in Kempton Park on Sunday afternoon, shortly after 4 pm.

Emergency personnel attending to the scene on Bronkhorstspruit Street found the cyclist in a critical condition, lying on the ground a few metres from his bicycle.

According to ER24, paramedics “immediately initiated advanced life support interventions before transporting the man to hospital for further medical care”.

“Despite the best efforts of all, he was declared dead shortly afterwards”, ER24 said in a statement.

As per a statement issued by Arrive Alive, the details surrounding the cause of the accident and preceding events will remain the subject of a police investigation.

Meanwhile, four people sustained fatal injuries and three others were left injured in a two-vehicle collision on the N17 between Bethal and Ermelo on Sunday.

“When ER24 paramedics arrived at the scene at approximately 19:30, they found two vehicles that had sustained extensive damage and local authorities already at the scene”.

Despite paramedics’ best efforts, the patients succumbed to their injuries and were declared dead at the scene. Another two patients were found to have sustained moderate injuries while another had sustained serious injuries.

Three patients were treated at the scene before being transported to the hospital for further medical assessment and care.

“The exact circumstances surrounding the incident were not known to our paramedics, but police were on the scene for further investigations”, ER24 said in a statement.