Ramaphosa, you are incompetent – 6 stinging Malema quotes from Sona debate

EFF leader Julius Malema rails against President Cyril Ramaphosa: 'There is honestly nothing to celebrate under your leadership.' 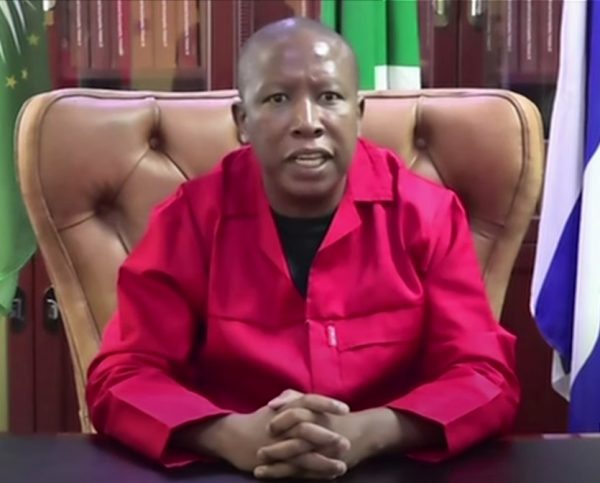 Economic Freedom Fighters (EFF) leader Julius Malema on Tuesday delivered a fiery speech during the debate on the State of the Nation Address (Sona) in the National Assembly.

In his lengthy speech that lasted almost 30 minutes, the EFF commander-in-chief criticised President Cyril Ramaphosa’s leadership and repeatedly referred to him as “incompetent”, “incapacitated” and “unreliable”.

Below are the six key quotes from Malema’s Sona debate:

“We have successfully displayed the Gupta criminal syndicate which had a lot of power under president [Jacob] Zuma. But it is now evident that the Guptas have been replaced by a very powerful white capitalist capture of the Ruperts, Oppenheimer’s… and all other white people who played a central role in buying the conference of the ruling party in 2017.”

“We want to state categorically that any leader of our country who owes loyalty to colonial settlers and white state capturers is defining himself as an enemy of the people. We will isolate and ultimately defeat all puppets of the white capitalist establishment.”

“The reality is that the conditions of our people are getting worse. And while coronavirus has worsened them, it is still not to blame for your general incompetence. The only thing your administration is competent at is the protection and benefit of the white capitalist establishment.

“This is evidently payback for the fact that white people, even under apartheid, protected and promoted you Mr Cyril Ramaphosa.”

‘Most unreliable human being’

“You are incompetent, incapacitated and the most unreliable human being. Perhaps it is something that you learned when you worked as the legal officer for the Oppenheimers.

“You are here pretending as though you believe in South Africa’s case, yet it is a lie.”

“When you prematurely acceded to power in 2018, many people – including the leadership and membership of the EFF – hoped you would bring some degree of stability. It has now been three years since you took office and we can all tell that you have not achieved anything that is worth mentioning.”

“We cannot continue to bury our heads in the sand against growing and now believable allegations that some prominent members of the judiciary are on the payroll of the white capitalist establishment.”

“If they continue to think they are the law and not the interpreters of the law, then the people will rise against such few judges who have made themselves the law and are conspiring with politicians to deal with the opponents of the current establishment.”

“Despite the PR stunts and showmanship you demonstrated during the State of the Nation Address, there is honestly nothing to celebrate under your leadership.”