'It is hypocritical for any leader of the ANC to parade themselves in the public as a stalwart of free education at a stroke,' says Mapaila. 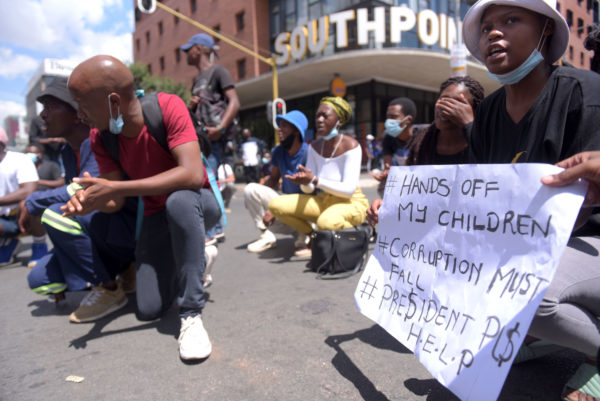 The SA Communist Party (SACP) has warned against ANC leaders who join student protests in favour of free education when the party has pursued a policy position on university fees that is somewhat more complex.

Without mentioning names, the party was likely referring to ANC secretary-general Ace Magashule and uMkhonto we Sizwe Military Veterans spokesperson Carl Niehaus, who joined a march by students demanding free education in Johannesburg earlier this month.

In a statement on Sunday following a weekend meeting of its central committee, the SACP said it was “disingenuous for the elements within our movement who either presided over cuts to college and university allocations to come out claiming the opposite”.

The part on the statement dealing with education was read by party first deputy secretary Solly Mapaila, in which the party said the ANC was the only formation that supported the austere budget presented by Finance Minister Tito Mboweni in Parliament last month.

Mapaila said: “It is hypocritical for any leader of the ANC to parade themselves in the public as a stalwart of free education at a stroke. The SACP warns elements within our broad movement not to use genuine education struggles to pursue factional conduct and agendas in our movement and society.”

Mapaila said the ANC had the responsibility to publicly support its own policies and policy positions, “instead of allowing some from within its leadership ranks to engage in opportunistic and populist postures that run against the ANC’s policies”.

He said the meeting reaffirmed the SACP’s stance on “free and compulsory basic education”, as well as access to technical, vocational and higher education and training for the poor and working class.

Mapaila said that the meeting welcomed the measures taken by the Department of Higher Education, Science and Technology to reprioritise funds towards the National Student Financial Aid Scheme “to ensure that no deserving student is excluded”.

The statement also called for government to give adequate resources to universities and public colleges.

The largest part of the statement was read by party general secretary Blade Nzimande, who is also Higher Education Minister.

Nzimande said the party wanted to warn “the factionalists calling themselves members of the so-called ‘Radical Economic Transformation’ (RET) [grouping]” who were using the name of struggle stalwart Chris Hani to create divisions in the ANC.

He said those people claimed they had more information about his assassination without presenting this to law enforcement authorities.

Nzimande also said the party reaffirmed its “commitment to the supremacy of our democratically adopted Constitution, primacy of the rule of law”, and said it supported the work of the state capture inquiry.

He said the party condemned the “regrouping of the post-Polokwane New Tendency” that was now coalescing around attacking the state capture inquiry.

The party said: “Elements behind this manoeuvre now appear to be destined for a counterrevolutionary offensive against some of the institutions of our democracy. These elements are deliberately intensifying divisions in our broader movement and sowing society wide chaos, to try and stop the law from taking its course.”

Nzimande also said the party supported the reactivation of the Defend Our Democracy campaign last week, which is a grouping of civil society organisations and leaders calling for law enforcement agencies to be given the space to do their work.