Malema says regardless of whether anyone thinks supporting Zuma is madness or not, 'people have got a right to be mad'. 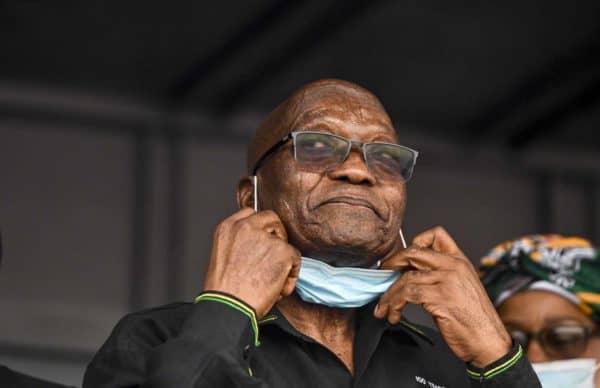 No one has the right to stop anyone in South Africa from supporting former president Jacob Zuma.

That is according to EFF leader Julius Malema, who condemned law-enforcement agencies for allegedly intimidating Zuma’s supporters.

“People who want to support Zuma, they must do it freely without any form of intimidation. They must do so within the confines of the Constitution of the Republic of South Africa. They’ve got a right to do so,” Malema said.

He was speaking on Wednesday during a press conference at the party’s headquarters in Braamfontein, Johannesburg.

Malema was referring to the arrest of ANC member and staunch Zuma supporter, Sizwe Nyambi, who was taken into custody earlier this month in Johannesburg.

At the time of his arrest, Nyambi was carrying plastic bags full of T-shirts emblazoned with “Wenzeni uZuma?”, which is isiZulu for “what has Zuma done?”.

Nyambi was arrested while waiting to board a bus from Johannesburg’s Park Station to KwaZulu-Natal to support Zuma at his arms deal corruption trial. He was released from jail after two days without being charged.

Nyambi is demanding R5 million in compensation from the South African Police Service and has threatened to sue should he not receive the money in 30 days.

‘Absolute rubbish that must be stopped’

Malema said this was intimidation from law enforcement agencies and Zuma’s supporters need to be protected.

“Since when is it a crime to carry Zuma T-shirts? [If] you allow that nonsense it’s going to start with Zuma’s supporters and go to the EFF’s supporters. They will say we found this person with EFF T-shirts and therefore you must be arrested,” he said.

“It’s absolute rubbish that must be stopped with immediate effect. It’s going to start with Zuma’s supporters [and] it’s coming to all of us.”

Malema said regardless of whether anyone thinks supporting Zuma is madness or not, “people have got a right to be mad”.

“No one can stop them from supporting anyone. So, Zuma’s supporters must be protected.”

In June, Zuma was sentenced to 15 months in jail for being contempt of the Constitutional Court. His arrest ostensibly ignited the deadly civil unrest that gripped parts of KwaZulu-Natal and Gauteng in July.

Earlier this month, Zuma was admitted to a military hospital for medical observation for an undisclosed illness.

The Department of Correctional Services said the statesman had a surgical procedure and his stay in hospital would be indefinite due to other scheduled procedures he has to undergo.

READ NEXT: Zuma foundation begs public for donations to cover his legal bills