Refiloe Nt’sekhe says she was encouraged to resign from running as the metro's mayor after the DA looked unlikely to win Ekurhuleni. 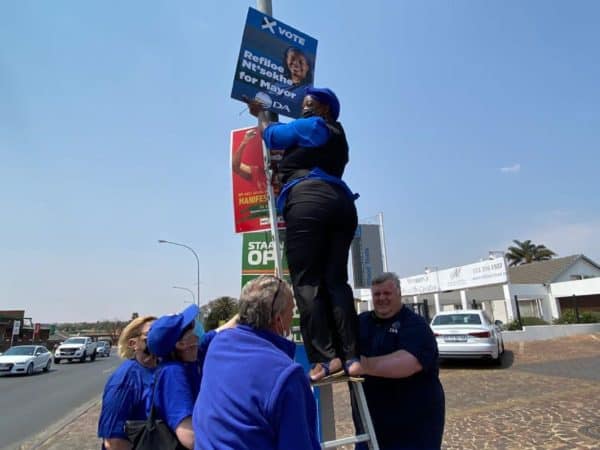 Picture File: The DA's former mayoral candidate for Ekurhuleni Refiloe Nt’sekhe climbing up the power pole to install her first poster in Ekurhuleni as a kick-off of her election campaign. Picture: Supplied

After dropping out of the mayoral race in Ekurhuleni at the last minute, the Democratic Alliance’s (DA’s) former mayoral candidate, Refiloe Nt’sekhe, says it is a “bittersweet moment” for her that the party unseated the ANC from power in the metro without her at the helm.

However, Nt’sekhe says she is not bitter that DA councillor Tania Campbell – who replaced her as the party’s mayoral candidate – was elected the mayor of Ekurhuleni on Monday by 116 votes, beating the ANC’s Mzwandile Masina, who received 105 votes.

“I want to be honest, it is sort of like a bittersweet moment for me in that I was the face of the campaign and people voted because they saw my face on the posters on the TV, radio and everywhere else,” Nt’sekhe said in an interview with Radio 702 on Tuesday.

Nt’sekhe surprised many after she was absent from Monday’s inaugural Ekurhuleni council meeting, after she led the DA’s election campaign in the metro.

‘I was encouraged to resign’

She said she was encouraged to resign from running as the metro’s mayor after the DA’s federal executive took the decision not to work with both the ANC and the Economic Freedom Fighters (EFF) in their coalition negotiations.

Nt’sekhe said because of this, the DA’s chances of taking control of Ekurhuleni from the ANC seemed slim at the time. However, this was not to be after the EFF and other opposition parties backed the DA’s candidates in Ekurhuleni and Johannesburg.

“I was encouraged to resign because obviously, I’m still a sitting member of the provincial legislature [in Gauteng] and no matter which way you count the numbers when you take the EFF and the ANC out… none of us expected that the EFF would vote with us or the parties that supported us,” Nt’sekhe said.

She said it was the DA’s Gauteng provincial leadership that encouraged her to resign and she subsequently submitted her resignation on 8 November.

“I don’t think they were wrong. I would have also encouraged somebody to resign because if there was no way of getting into government, the person who’s next on the [DA’s] list is prevented from coming in as the next councillor,” she said.

Asked why the DA did not reverse her resignation as the party’s mayoral candidate, Nt’sekhe said she did not want to destabilise the DA caucus which met and elected Campbell as their leader.

“I’m a person of principle. The fact that I had already submitted my resignation… I think it would be unfair on the caucus to then destabilise them after they’ve gone through a whole election.

“I was asked on numerous occasions and I still said to them ‘colleagues let us serve, it doesn’t matter whose at the helm as long as we serve the residents of Ekurhuleni,” Nt’sekhe said.