The Johannesburg mayor was in Vlakfontein on Monday, where he was confronted about not having visited Alexandra township yet. 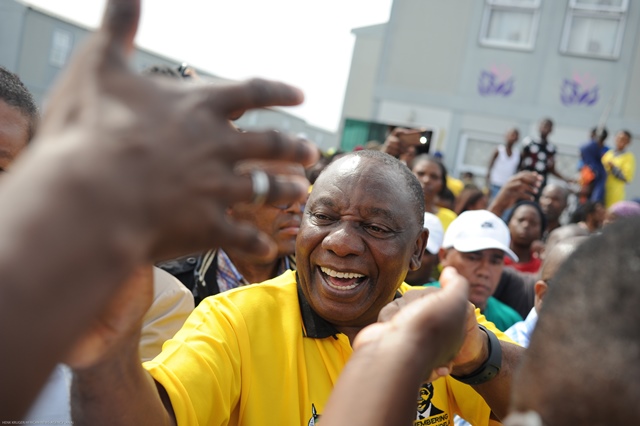 Johannesburg executive mayor Herman Mashaba says he has written to President Cyril Ramaphosa asking to join him on his planned visit to Alexandra township this Thursday. Residents have been protesting a lack of service delivery and the mushrooming of informal settlements in the area since last week Wednesday.

On Friday, Mashaba said he would be meeting with community leaders in Alex on April 15.

Mashaba now says he also wants to join Ramaphosa as part of an “inter-governmental dialogue,” adding that he believes the housing problem in Alex is also taking place on a national scale.

This follows reports that Ramaphosa will visit Alexandra on Thursday to “address the grievances of the people of Alex”.

Gauteng Premier David Makhura confirmed Ramaphosa’s planned meeting and added he would meet with the Alex Shutdown Committee himself on Tuesday.

Makhura revealed this information in a tweet where he took the DA to task for “blame-shifting”.

DA Gauteng premier candidate Solly Msimanga laid charges against the ANC at the Alexandra police station on Sunday, accusing the party of “inciting violence” and orchestrating the protest to “influence the outcome” of the upcoming May 8 elections.

Leaders of the protest have made it clear they want Johannesburg executive mayor Herman Mashaba to hear their grievances, vowing to take the protest to Sandton on Monday morning if he didn’t pitch up.

Mashaba was expected to go on Friday, but said he had received no formal invitation, blaming “malicious reporting” for the expectation he would be there.

The Johannesburg mayor went to Vlakfontein on Monday, where he was asked by eNCA why he was not in Alex.

“This arrangement was planned way in advance. Can you imagine if I failed to show up here what would really happen?” Mashaba said.

Asked if Mashaba could not have sent someone else to Vlakfontein in his place, he said: “People in Vlakfontein are as important. They were promised that we will be there to ensure that this project is carried out properly”.

The interviewer then asked why Mashaba is not prioritising Alex, which is “burning” and has demanded the mayor’s presence.

“Are the residents of Vlakfontein not important as well? Must I ignore one problem to attend to another and have the whole city burning? I have got people in Sandton, I had to ask the city manager to accept the memorandum on my behalf, so we are not taking the situation for granted,” he said.

Mashaba is reportedly in Vlakfontein to address service delivery issues and to hand over stands to residents.

The mayor addressed an apparent mix-up with land allocation, and today rectified it by allocating the correct stands to the residents.

“I’m here in Vlakfontein as part of our new multi-party government to provide service stands to our people. Previous government focused on the RDP failed system, where we could only produce 2,500 houses a year, whereas the City of Johannesburg is sitting with a 300,000 housing backlog,” Mashaba said.

“At the same time, ever since we took over, they have reduced our housing grant by half. But then we felt that as a multi-party government, let us look at identifying city-owned land, provide services, give title deeds to our people … Once they have title deeds, they’ve got an opportunity to go to the bank to apply for loans to buy their own houses,” he continued.

The DA is busy with blame-shifting, not delivery. I will meet with #AlexShutDown Committee on Tuesday, while President @CyrilRamaphosa will visit Alex on Thursday to address the grievances of the people of Alex. We are problem-solvers, not blame-shifters.

Alexandra residents were on Monday undeterred by rain as they forged ahead with plans to march to the Sandton CBD to protest the lack of service delivery in their township.

Alexandra residents have been protesting for nearly a week, angry at what they call the failure of the government and the city council to attend to their grievances.

They say they are tired of lawlessness, poor service delivery, and the increasing number of informal structures mushrooming in the township.