The former COO says the company received assistance from advocate Menzi Simelane to shut down an investigation into it. 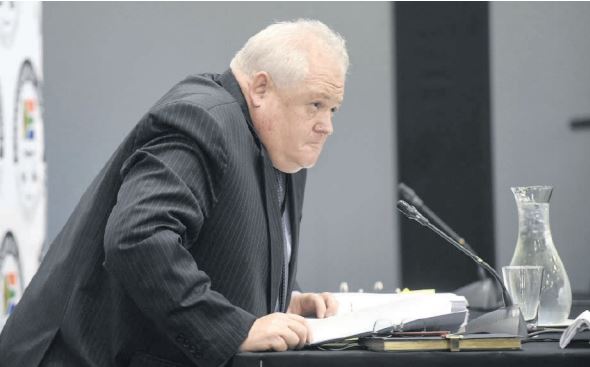 These documents included affidavits dealing with procurement issues at the department of correctional services (DCS); correspondence between former prosecutor for the NPA Glynnis Breytenbach and the former director of the authority, advocate Menzi Simelane; minutes of a special extended ministerial meeting; and lists of witnesses and potential witnesses and those who were expected to give statements in the NPA’s investigation into Bosasa.

The former commissioner of the DCS, Linda Mti, gave Agrizzi documents he claimed came from Nomgcobo Jiba, Lawrence Mrwebi, or Jackie Lepinka which were used to subvert the investigation.

The minutes of the special extended ministerial meeting dated March 9, 2010, revealed how Simelane presented a report to the former minister of justice and correctional services, Jeff Radebe, and others, which outlined the “unconstitutionality” of the special investigations unit (SIU) and how the evidence within it would not “hold water” in court.

The SIU in 2009 referred a report on the DCS-awarded tenders to Bosasa to the NPA, however, the authority had not taken any action.

Agrizzi told the commission that Bosasa was receiving assistance from Simelane to “shut down” the investigation.

Other documents that Agrizzi and Bosasa CEO Gavin Watson received meant they knew who would testify and give statements, and who had done so, to investigators and that these included DCS officials who were on the company’s “payroll” – who were being paid bribes.

“Whatever we requested we would get, there was no issue,” Agrizzi said.

Bank statements, lists of bank accounts, and other financial records which investigators would scrutinise were given to Agrizzi and Watson.

These documents, and the lists of potential witnesses and those who had given statements, were “extremely useful” to Agrizzi and Watson, said Agrizzi, with witnesses manipulated with “wads of cash” to change their statements.

Agrizzi said a document marked confidential and dated October 28, 2011, was given to them which they could use as a mechanism to defend their case in court should the need arise.

He said the documents emanating from the NPA would be handed to Bosasa’s attorney who would look through them and give advice on how best to shut down the possible prosecution of the company and its officials.