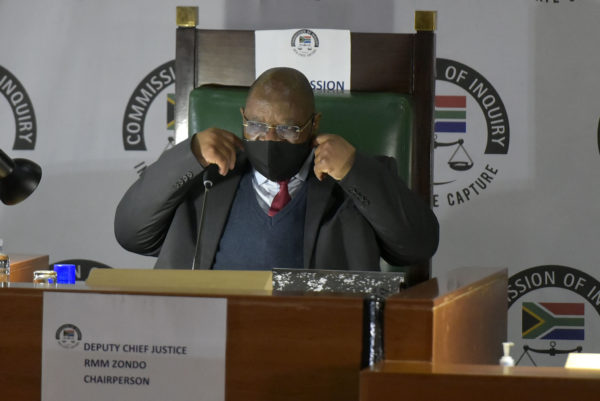 The Judicial Commission of Inquiry into Allegations of  State Capture chaired by Deputy Chief Justice Raymond Zondo will resume its hearings on Friday, 9 April.

The commission’s secretary, Professor Itumeleng Mosala confirmed the matter to The Citizen on Wednesday morning.

“The commission will also hear an application filed by Mr Gigaba to cross-examine Ms Mngoma,” he said.

Before heading into the Easter weekend, the commission had announced on Twitter that proceedings would resume on Tuesday. However, no hearing took place.

This means that the commission will go nearly a week – excluding the public holidays – without any action.

Meanwhile, the last testimony at the commission came from former Eskom chief executive Matshela Koko last week Monday, where he took a dig at President Cyril Ramaphosa ahead of his appearance before the commission later this month.

Koko told Zondo that he would “not rest peacefully” until he knew why Ramaphosa – who was deputy president of South Africa at the time Koko was in office – interfered in the “affairs of Eskom to instruct the board that was yet to meet to dismiss me”.

“So I look forward to Mr Ramaphosa coming here. I hope you have served him with 3.3 Notices. I looked at the documents that were sent to me last night and they were voluminous,” he said.

Ramaphosa is expected to appear before Zondo – on 22, 23, 28 and 29 April 2021 – where he will testify on  behalf of the ANC and also in his capacity as the president and former deputy president of the country.

The President has since confirmed that he will indeed appear at the commission.

Proceedings became heated when Mpofu, who cross-examined Gordhan on behalf of former Sars commissioner Tom Moyane, told Michelle le Roux, acting on behalf of the minister, to “shut up”.

Mpofu complained about being interrupted by Le Roux, asking her to allow him to speak.

Zondo described the incident as Mpofu’s comments as “unacceptable and disrespectful to the commission“.

The Constitutional Court (ConCourt) heard arguments last month why former president Jacob Zuma should be jailed for his refusal to honour a summons to appear before the commission.

The court ruled in January that Zuma should appear before the commission and answer questions put to him, but he has vowed not to do so, maintaining his stance that he doesn’t fear being arrested.

One of the reasons Zuma has argued for his defiance was that he was still waiting for the outcome of his Pretoria high court application challenging Zondo’s decision in November 2020 not to recuse himself from hearing his testimony.

Zuma faces the possibility of a prison term of two years if he is found guilty of contempt of court while the ConCourt has since reserved judgment on the case.

Avoiding jeers in township of his birth, Cyril cheered in Ace's 'stronghold'
20 hours ago
20 hours ago
PREMIUM!

Avoiding jeers in township of his birth, Cyril cheered in Ace's 'stronghold'
20 hours ago
20 hours ago
PREMIUM!