Women in sport: The Barbie doll who turns beast on the track

Zeney van der Walt has already left an indelible mark as a teenage starlet. Now she's ready for another step-up 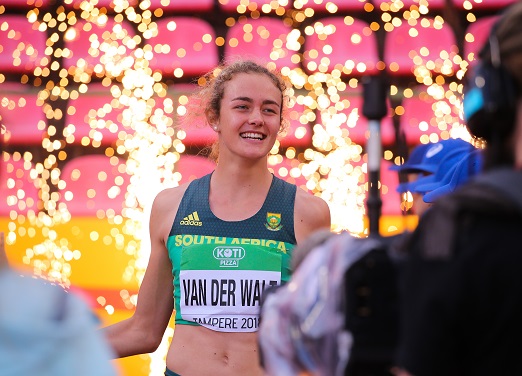 Zeney van der Walt of South Africa walks out onto the track for the women's 400m hurdles final during the afternoon session day 4 of the IAAF World U20 Championships at Tampere Stadium on July 13, 2018 in Tampere, Finland. (Photo by Roger Sedres/Gallo Images)

At first glance, Zeney van der Walt shares more of a resemblance with a Barbie doll than she does a battle-hardened warrior.

And while looks can be deceiving, in Van der Walt’s case, the deception runs deep.

From her mannerisms, to her frizzy but immaculate hair, to her friendly, high-pitched voice, Van der Walt seems as threatening as a ball of cotton wool.

Put her on a track, however, and the 18-year-old athlete’s entire persona will morph in an instant.

When the gun is fired for the start of a 400m hurdles race, Van der Walt becomes a beast.

A couple of years ago, at the 2017 IAAF World U-18 Championships in Nairobi, Van der Walt had a packed crowd on its feet.

Turning into the home straight in the final, she was well off the pace of Jamaican athlete Sanique Walter with 100m left to run, but she fought for every inch and closed her down to take the gold medal on the line, winning the race by just four hundredths of a second (0.04).

“I don’t even know if I won. I just prayed and hoped I was first over the line,” a beaming Van der Walt gasped in an interview after the race.

“I didn’t expect this because I wanted a place on the podium and now it’s gold.”

As surprised as she may have been, however, that victory was no fluke, and last year the teenager from Pretoria displayed similar grit and determination on home soil.

Competing in the final of the ASA Senior Championships in Pretoria, Van der Walt was locked in a battle against Commonwealth Games bronze medallist Wenda Nel, and though she settled for the silver medal, she again showcased her tremendous potential.

She crossed the line in 55.05 seconds – just 0.04 behind her more experienced compatriot – and shattered the national junior record of 55.74 which had been held by hurdles legend Myrtle Bothma for 35 years.

And she returned to winning form later in the 2018 season, this time making sure as she scorched to a convincing victory at the IAAF World U-20 Championships in Tampere, finishing well clear of her nearest opponent to secure her second global title.

While she remained in the junior ranks this year, Van der Walt had already cemented her place as one of the country’s most promising track and field athletes.

And though she had been tipped to break Bothma’s 33-year-old national senior record of 53.74 in her specialist event, Van der Walt insisted this week she was not getting caught up in the hype.

After focussing on her flat speed at the Twizza ASA U-18 and U-20 Championships in Paarl, she was expected to return to the one-lap sprint over the barriers for the upcoming national student championships, as well as the national senior championships where she was again set to line up against Nel.

“I’m focussing now on juniors, then next week it’s the USSA champs, and then it’s seniors, so I’m just taking it step by step,” she said.

After matriculating last year from Afrikaans Hoër Meisieskool, Van der Walt was in her first year of varsity at the University of Pretoria where she hoped to get a degree in education.

Aware of her own ability, however, she was retaining much of her focus on her chosen sport.

Looking ahead, more records seem inevitable as she embarks on what promises to be a spectacular senior career, and though Van der Walt is reluctant to commit to fast times, she knows she can go faster.

On the sidelines of the track she may be more of a beauty, but she’s happy to remind her opponents that when the gun goes, she’s just as much of a beast.

“I’d like to go to the World Student Games and the World Championships (later this year), so I’m working on that,” she said.

“People are also talking about records but I’m not allowing that to put pressure on me. If it comes, it comes.”