The Lions head coach said he was still confident the Test series against the Springboks would go ahead. 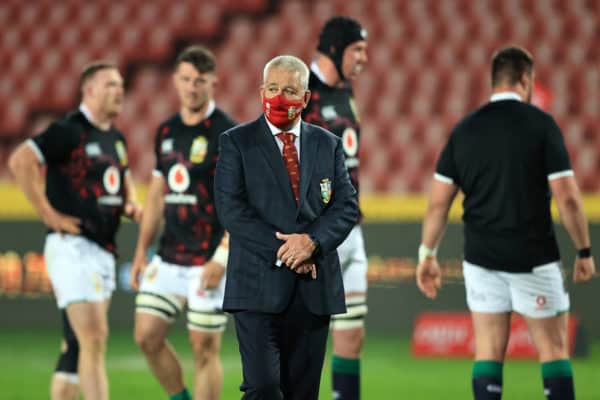 Lions coach Warren Gatland on the field at Ellis Park on Wednesday, prior to the tour match against the Sharks. Picture: David Rogers/Getty Images

British and Irish Lions coach Warren Gatland paid tribute on Wednesday to his players after what he said was a “surreal day, and a real challenge”.

Speaking after the Lions gained another easy win, 56-7 against the Sharks, Gatland said he was “incredibly proud” of the players after a day of drama in which he had to make eight changes to the match squad because of Covid-19.

“More than the performance and the result, I’m really proud of the togetherness of the group and how much they want to go out and perform and play and wear this jersey,” said Gatland.

One player and one staff member tested positive, which led to a further eight players and four staff being placed in isolation because they had close contacts with the infected people.

The entire squad had to be tested again and the kick-off was delayed by an hour to 8pm to enable the test result to be assessed.

“We did not get the results until half past five and we had to make a few changes,” said Gatland.

Gatland did not specify which players were unavailable, but Ali Price was the only scrumhalf in the 23-man matchday squad.

Gareth Davies, who had been due to start, and tour captain Conor Murray, who was among the original substitutes, were withdrawn.

Price was called into action despite having a slight quad muscle strain.

The bench was made up of seven forwards and only one back.

Even though Saturday’s scheduled match against the Bulls had already been postponed after multiple cases of Covid in the South African camp, Gatland said he expected the three-match Test series against the Springboks to go ahead.

The first Test is scheduled for Cape Town for July 24.

The Lions coach said there would be a discussion with the medical team on Thursday. He said he understood that the player who tested positive had “a very weak positive”.

“He will be tested again tomorrow and maybe he will be clear which means the close contacts will be okay.”

Gatland said he was not sure how Covid had penetrated the Lions “bubble”, but it might have been when they arrived at their hotel last week.

“A number of the hotel staff tested positive and had to be removed,” said the New Zealand-born coach.

Captain Iain Henderson said it had been a difficult day.

“We were tested twice today and guys were not sure whether they would be able to leave the room and be able to play. You sit on the edge of your bed all day waiting to get the all clear.”

One player who impressed after not being in the original 23 was England’s Owen Farrell, who played at flyhalf.

Former Springbok captains John Smit and Victor Matfield both singled out the England captain on the SuperSport channel.

“Farrell is a winner. He has got to be in the Test side,” said Smit.

Matfield said Farrell could play at either flyhalf or centre.

'Master the breakdown, be unstoppable' in URC — Sharks' Richardson
2 months ago
2 months ago

Everitt looks to Pienaar, Chamberlain to guide Sharks in Cardiff
2 months ago
2 months ago

'Master the breakdown, be unstoppable' in URC — Sharks' Richardson
2 months ago
2 months ago

Everitt looks to Pienaar, Chamberlain to guide Sharks in Cardiff
2 months ago
2 months ago