Ottis Gibson, the national team's mentor, jokes that he can retire now with a 100% win record in Test cricket! 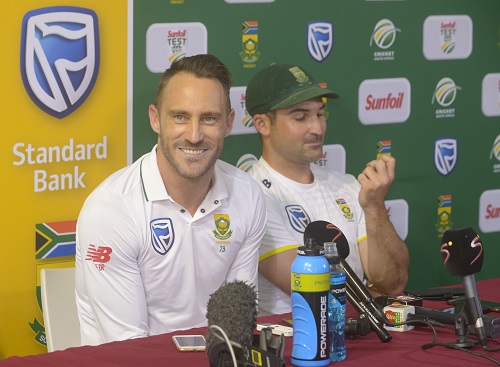 The new coach was happy and so was the captain Faf du Plessis, who described the Proteas’ 333-run victory over Bangladesh in Potchefstroom on Monday as “spotless”.

The final day began with South Africa hunting the last seven Bangladesh wickets without the man who had taken two of the three that had fallen, fast bowling spearhead Morne Morkel (side strain).

But Kagiso Rabada finally gained the reward that had eluded him on the first four days and in the end the tourists’ resistance lasted just 84 minutes as they lost their remaining wickets for just 41 runs.

Rabada set the ball rolling with the first three to fall, before left-arm spinner Keshav Maharaj wrapped up the innings with four for 25 in 10.4 overs.

“As an all-round performance, that was spotless. All the things that we were working on, all the question marks from before the game, were answered. The amount of runs we scored – it was obviously a really good batting pitch – but that was very good, the opening partnership, and guys getting in and then cashing in.

“The bowlers also put their hands up and showed excellent skills. I was pleased with the style of our win but not the conditions. Against countries like Bangladesh, you need to get something from the pitch, some sort of advantage, but we didn’t get that. But the bowlers adapted beautifully and hit consistent areas,” Du Plessis said after the win, which was South Africa’s first against Bangladesh by a runs margin after seven previous victories by an innings and one by five wickets.

“The new coach is very happy too and Ottis joked that he’s going to retire now because he has a 100% strike-rate. He’s already put a few plans in place, we are already having good conversations and planning so we stay ahead of the curve. He’s similar to myself in that he enjoys structure and I’m very excited about working with him,” the captain said.

With seven wickets remaining on a good batting pitch and thundershowers arriving after lunch, Bangladesh captain Mushfiqur Rahim said his team had missed a juicy opportunity to salvage an impressive draw after losing all four of their previous Tests in South Africa.

“It was a great opportunity to just bat, but we messed it up. We knew it would not be easy to face the South African bowlers in the late part of the game, but the pitch was still pretty good. But as a batting unit we just didn’t show enough skill nor character and that hurts as captain.

“There are a lot of ways to put your hands up and show fight, but we didn’t and that’s the most disappointing thing. But South Africa have a very well-balanced attack which is why they are one of the best teams in the world home and away,” Mushfiqur said.