No less than four Springboks will run out for Jake White's team against the men from Joburg. 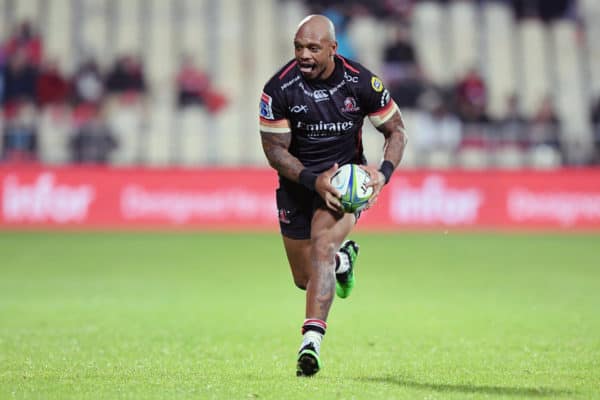 The last time Lionel Mapoe played rugby in South Africa it was for the Lions; now he will be in action for the Bulls, against his former team. Picture: Kai Schwoerer/Getty Images

After shocking the South Africa ‘A’ side a little over a week ago, the Bulls return to Currie Cup action this weekend and they’ll very much be the favourites against neighbours, the Lions, at Loftus Versfeld on Sunday (3.15pm).

Director of rugby Jake White has been able to pick a star-studded side for the match with four Springboks in the starting team.

Following his impressive showing on debut against the SA ‘A’ side, flyhalf Johan Goosen will be back in action in the Currie Cup after several years playing in France, while fellow Boks Cornal Hendricks, Lionel Mapoe and Marcell Coetzee will also face the Lions.

This will be Mapoe’s first game for the team from Pretoria and like his centre partner Harold Vorster it comes against his former team. The duo formed a formidable midfield partnership when in Joburg and White will hope for that same chemistry in the blue jersey.

Coetzee is back to lead the side after missing out on the SA ‘A’ match, while Hendricks shifts to the right wing for the first time in months – the position where he became a Bok.

The Kriel brothers, David and Richard, will also play in the backline, while the exciting Elrigh Louw will play at No 8 this week.

The Lions, who lost to Griquas in midweek, will name their team on Saturday and they should welcome back Wandisile Simelane, who’s been released from the wider Springbok training squad. Vincent Tshituka and his younger brother Emmanuel could also be back after missing out on Wednesday, but Jaco Kriel is still out with a niggle.

In the earlier match Sunday (1pm), the Pumas host a Western Province outfit reeling from back-to-back defeats by the British and Irish Lions as well as the Cheetahs in midweek.

The Pumas, who will start as favourites in Mbombela, are second on the log and Western Province fifth.

The weekend action gets underway with the Cheetahs hosting the Sharks at 2.30pm on Saturday. The home team will be full of confidence after recording a big win against WP, while this will be the Sharks’ first outing in two weeks against local opposition after playing against the touring Lions twice in four days.

Master and student: Fourie excited to show Simelane the No 13 ropes
6 hours ago
6 hours ago

Currie Cup final: White all fired-up for Sharks dogfight
1 week ago
1 week ago

Master and student: Fourie excited to show Simelane the No 13 ropes
6 hours ago
6 hours ago

Currie Cup final: White all fired-up for Sharks dogfight
1 week ago
1 week ago