Who will dominate in the set pieces, how will the referee manage the scrums, and what role will an empty stadium play? 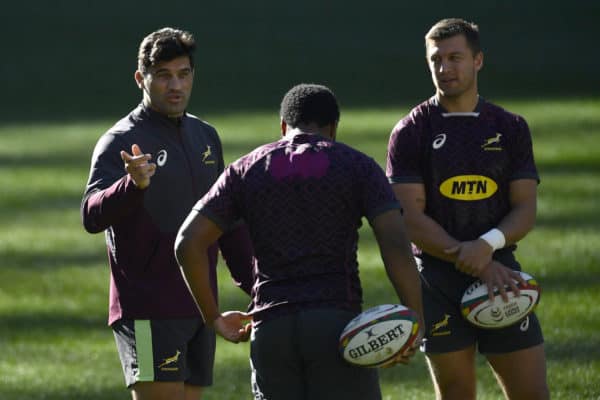 Springbok players Damian de Allende, left, and Handre Pollard, right, speak to Lukhanyo Am, ahead of the first Test against the British and Irish Lions in Cape Town on Saturday. Picture: Ashley Vlotman/Gallo Images

The long wait is over. The first of three Tests between the world champion Springboks and the British and Irish Lions kicks off at 6pm at the Cape Town Stadium on Saturday.

Here, The Citizen lists five factors that could play a big role in the outcome of the highly anticipated and eagerly awaited first Test.

The Springboks’ control of the scrums against England in the World Cup final in 2019 put them on the road to victory. Will it be the case against the Lions, too? Props Trevor Nyakane and Ox Nche face huge tests against Wyn Jones and Tadhg Furlong respectively, while in the lineouts the Boks will look to take advantage of a perhaps under-cooked captain Alun Wyn Jones.

The 6-2 bench split was hugely significant for the Boks at the World Cup, but due to conditioning reasons the hosts go in with a 5-3 split between forwards and backs on Saturday. The “new” front row is sure to add grunt later on, Lood de Jager and Rynhardt Elstadt will bring power and aggression, but how will the Lions respond with their bench – an aspect of the game that could be telling.

The Lions have a Test against Japan and five tour matches behind them; the Boks have a Test (against Georgia) and two games as the SA ‘A’ team against the tourists and Bulls in the bank. Is it enough for the hosts? Also, several players, including captain Siya Kolisi, wing Makazole Mapimpi and flyhalf Handre Pollard, have been out with Covid. Are the Boks physically ready and battle-hardened for what is to come?

Who will miss the fans the most? The Boks would normally have thousands of green-and-gold clad fans in the stands cheering them on, while the Lions’ travelling supporters are famous all over the world; their red jerseys cannot be missed. With the magnificent Cape Town Stadium to be completely quiet, except for the players, referee and “waterboys”, who’ll adapt best?

Australian Nic Berry will be in charge of this Test and while it is never a good thing to include the referee in a list such as this, the reality is the man with the whistle almost always has a big say in how a game unfolds. How will Berry manage the scrums, the breakdowns, and the specifically the tackle – something that has led to several players being carded for in recent times?