Springbok management have ensured that wherever they have brought in fresh faces, they have experienced back-up close by. 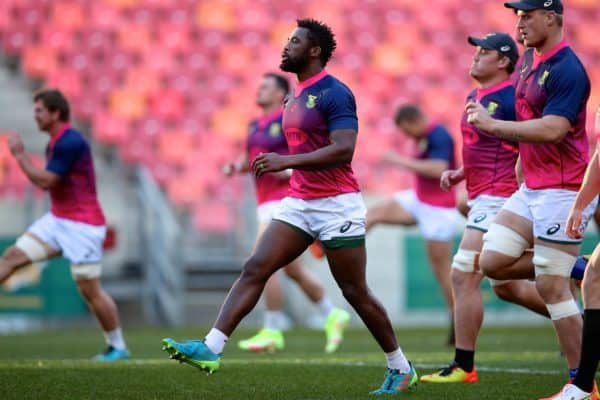 Captain Siya Kolisi and talismanic lock Eben Etzebeth are players to whom the saying ‘no rest for the wicked’ might be applied as they have been tasked with fronting up again for the Springboks in the opening Rugby Championship Test against Argentina at Nelson Mandela Bay Stadium on Saturday.

They are the only players who started all three of the brutal Tests against the British and Irish Lions who are not getting a breather this weekend, and it is a credit to their superb, wickedly good conditioning and mental strength that they are ready to go again on Saturday.

When coach Jacques Nienaber announced the team on Tuesday, he made it clear that the 10 changes made to the starting XV, and two more on the bench, were due to the need to rotate players in order to give them sufficient rest and game-time.

“We mean zero disrespect to Argentina, but our challenge is we have five big Tests on the trot, on successive weekends, and we have to look at player welfare more than anything else,” Nienaber said.

“Our first goal is always to win, but secondly we want to create squad depth. A lot of various things go into deciding who to rotate, and the guys not playing are not resting. They still play a massive role in preparation.”

So why are Kolisi and Etzebeth, a duo who put their bodies on the line more than most against the Lions, still playing?

“Winning is what is required at the moment and if guys are physically and mentally ready to play then they will play,” Nienaber explained.

“We also want to ensure continuity of leadership. We didn’t want to upset the applecart by taking too many leaders out.

“We look at player welfare wherever we can, but if a player is able to play six or seven Tests on the trot then we will choose him.”

The Springbok management have ensured that wherever they have brought in fresh faces, they have experienced back-up close by. A new-look front row of Ox Nche, debutant Joseph Dweba and Wilco Louw has the bomb squad front row of Trevor Nyakane, Malcolm Marx and Vincent Koch standing by on the bench; Etzebeth and Lood de Jager are a seasoned lock pairing; and a new-look backline will be guided by wise old heads in Elton Jantjies, Francois Steyn and Jesse Kriel.

“The starting front row has not played for a while and it is Joseph’s first Test, and Wilco was with us in 2018 so he’s a new old guy coming back. But there’s lots of consistency in the second row and the front row that will come off the bench,” Nienaber said.

“And it’s a new backline but a guy like Jesse with 47 caps will take over as defence captain from Lukhanyo Am, not to mention Frans, and Elton has consistently been part of our squad since 2018.

“There’s a good culture in the group in that guys are disappointed not to get chosen but they never get negative. They know they have another role in the team.

“We have had a group of players who have contributed for weeks, every day, but have not had the chance to play, but they don’t get negative. A guy like Elton has been outstanding in that regard.”