Cooper hailed after kicking Wallabies to victory over Boks

The flyhalf converted all eight of his kicks for 23 points, despite not playing a professional match since the end of April. 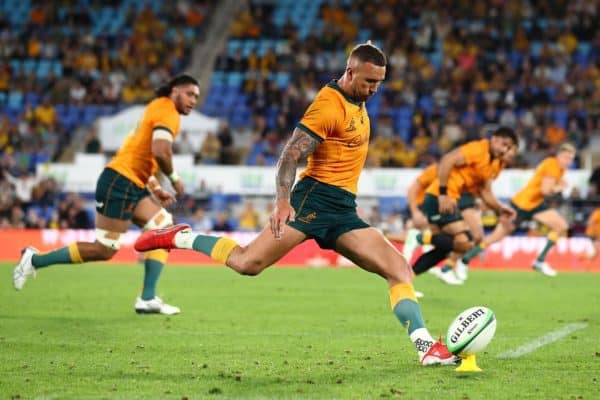 GOLD COAST, AUSTRALIA - SEPTEMBER 12: during the Rugby Championship match between the South Africa Springboks and the Australian Wallabies at Cbus Super Stadium on September 12, 2021 in Gold Coast, Australia. (Photo by Chris Hyde/Getty Images)

Quade Cooper’s fairytale return from the international wilderness so impressed Wallabies coach Dave Rennie that he has backed the mercurial flyhalf to stay in contention all the way to the 2023 World Cup.

The 33-year-old, in his first Test in four years, showed nerves of steel to nail a 40-metre penalty after the hooter on Sunday, earning Australia a thrilling 28-26 Rugby Championship win over World Cup holders South Africa.

It capped a remarkable comeback by the Japan-based star, who converted eight-from-eight kicks for 23 points despite not playing a professional match since the end of April.

His trusty boot complemented a composed all-round game, with his calming influence in his 71st Test justifying the bold selection by Rennie, who said Cooper could make another World Cup.

“Of course he could,” said Rennie when asked about the playmaker’s chances of going to the next tournament in France.

“We’re not thinking too far ahead at this stage and neither is he. He was excited to get an opportunity and delivered big time.

“We’ll reassess and see how things go. But he’s keen and available for the rest of the year and we’ll make a call beyond that.”

Rennie pointed to Cooper’s confidence and experience as making the key difference to a young side that came into the clash on the Gold Coast after three straight defeats to New Zealand.

“We had to be prepared to kick them a bit of ball back,” he said of the tactics employed against the Springboks.

“He had a big part to play in that. I thought he was excellent and implemented things well. Credit to him. Against the world champions, it was a hell of an effort.”

Ice-cool Cooper, who was discarded by former coach Michael Cheika, said he knew he had it in him to make the pressure-filled kick after the siren.

“I looked at it and had a little chat to myself and said ‘is this your ego saying you want to take the kick? Or what’s going to benefit the team?’,” he told broadcaster Stan Sports.

“I looked over and had a little chat to Hodgey. He backed me. If your peers are backing you, you’ve got to back yourself.

“It was one of the great all-time Test matches I’ve played in.”

It has been a rollercoaster ride for Cooper after being dropped by Cheika in 2017 and let go by the Queensland Reds.

He resorted to playing club rugby in Brisbane before a stint with the Melbourne Rebels in 2019, but missed out of selection for the World Cup that year.

He credited two-time World Cup-winning All Blacks centre Sonny Bill Williams as helping him through the tough times.

“When things went a bit pear-shaped a few years ago, he was the first guy to reach out to me and I spent about two-three months with him, just living with him every day and seeing what it takes to be a good, strong man every day,” he said.

“You see him with his family, with his teammates, the dedication, the hard work he puts into his day-to-day life, not just when he turns up to footy training, about being a better man, about being better for himself.”