Will Pollard get chance to make amends against Wallabies?

With back-to-back Tests against the All Blacks around the corner, will someone else take over the No 10 jersey this weekend? 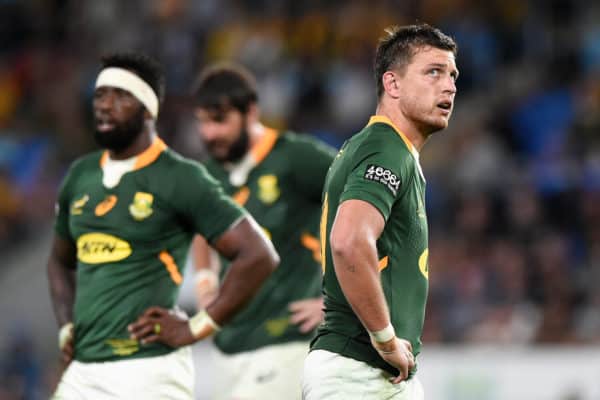 Handré Pollard of the Springboks, right, looks on during the Rugby Championship match against Australia last weekend. In the background is captain Siya Kolisi and lock Lood de Jager. Picture: Matt Roberts/Getty Images

Will Springbok No 10 Handre Pollard get a chance to make up for his off-day with the boot when the Boks take on the Wallabies in their fourth Rugby Championship Test in Australia on Saturday?

The Bok flyhalf missed several shots at goal as the Boks lost to a Quade Cooper-inspired penalty for the Wallabies in the last minute of the match in the Gold Coast on Sunday – the visitors’ first match away from home since the World Cup triumph in Japan in 2019 and their first loss in this year’s competition.

Pollard though, despite being the Boks’ first choice No 10 by some distance and usually a reliable goal-kicker and operator, might miss out on the match this weekend.

With back-to-back Tests against the All Blacks to follow this weekend’s outing, the Bok management team, led by coach Jacques Nienaber, may opt to rest Pollard for those challenges.

The Boks do, after all, have three other flyhalf options on tour, namely Elton Jantjies, who started recently against Argentina in Gqeberha, Damian Willemse, who replaced Pollard at flyhalf last weekend (and also missed a crucial shot at goal), and of course, veteran Morne Steyn, who for the second time in his career recently – and 12 years apart – kicked the winning penalty to help the Boks beat the British and Irish Lions.

Nienaber will name his matchday 23 at 11am on Wednesday.

“The goal-kicking is an area that has been discussed. Handre is a professional, he’s a quality player and has lots of experience; and he’ll be the first guy to say he didn’t perform, that he wasn’t on song,” said Davids.

“We know what he can do, he’ll work hard and he’ll be back.”

It will be interesting to see though who wears the Bok No 10 this Saturday in Brisbane – Pollard, who is also the team vice captain, or someone else?