"I’m just trying to fill his shoes to the best of my ability," said the regular lock who now wears the No 7 on his back. 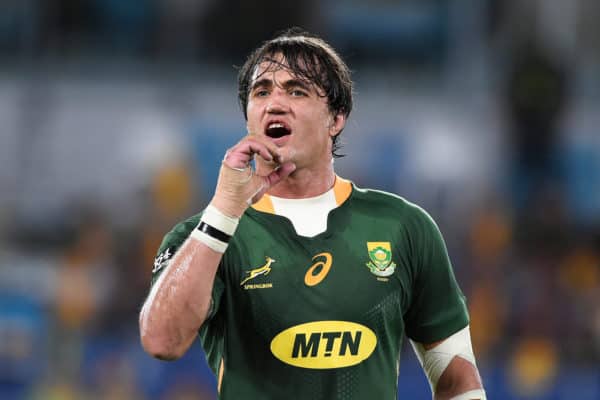 Franco Mostert of the Springboks is 'honoured' to wear the No 7 jersey. Picture: Matt Roberts/Getty Images

Springbok workhorse Franco Mostert says it is an honour to wear the Bok No 7 jersey usually donned by recent World Rugby Player of the Year, Pieter-Steph du Toit.

Mostert, who is actually a No 5 lock, has taken over Du Toit’s role on the side of the scrum in recent Tests, following an injury that has ruled the latter player out of the Rugby Championship.

Du Toit himself is a former lock who was shifted to blindside flank – exactly what has happened to Mostert.

The former Lions man and Gloucester Rugby player, who now turns out for Honda Heat in Japan, has made the transition fairly easily and without hiccup – and ensured the Boks have been able to keep their multiple lineout options, as would be the case with Du Toit in the team.

The 30-year-old this week called his transition to flank “an unbelievable journey” and added, “there’s not one guy who wouldn’t play in any jersey to be a part of this Bok squad.”

ALSO READ: Will Pollard get chance to make amends against Wallabies?

The World Cup winner, who shot to prominence while playing under Johan Ackermann at the Lions, said he just wanted to honour the jersey he wore.

“To take over from Pieter-Steph, who’s a world class and quality player, is a huge honour,” said Mostert, who has already played in 44 Tests.

“I’m just trying to fill his shoes to the best of my ability. Hopefully I can make him proud, and all the players who wore the No 7 before me.”

Mostert thanked his coaches and team-mates for their support.

“Adapting (to the new role) hasn’t been too tough; it’s important to have had the backing of the coaches. It’s been a lekker journey so far.”

Mostert is set to continue in his role on the blindside flank when the Springboks play their fourth Rugby Championship game against Australia in Brisbane this weekend. The Boks team for the match will be named around mid-day Wednesday.