The world champions crashed to defeat to the Australians for the second time in six days. 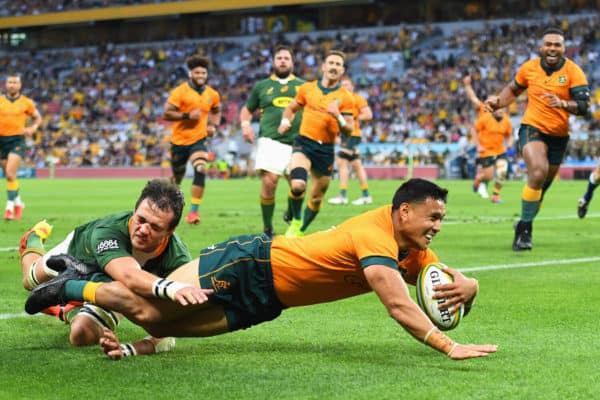 Len Ikitau of the Wallabies scores a try against the Springboks in the Rugby Championship match in Brisbane on Saturday. Picture: Albert Perez/Getty Images

For a second week in a row, the Springboks produced a messy, error-strewn performance as Australia showed top-class finishing to beat them 30-17 in their Rugby Championship Test in Brisbane on Saturday.

A clinical Wallabies side did not need to create a whole lot as they were gifted a bonus point through a slew of basics mistakes by the Springboks, who showed a dismal lack of nous and accuracy at the breakdown.

They were helped by a dreadfully scrappy defensive effort by the visitors, with a third of their tackles missed.

South Africa made a terrible start to the game as scrumhalf Faf de Klerk was yellow-carded for a stupid act of ill-discipline, playing his opposite number at a ruck on his 22-metre line.

Ikitau burst through two soft tackles to score the opening try after the penalty was kicked to touch, but more importantly, Australia had been gifted momentum and a firm grip on the match from early in the piece.

Ikitau scored again just before De Klerk returned, hooker Folau Fainga’a’s strong charge giving them front-foot ball and a killer inside pass from fullback Tom Banks to Koroibete providing the centre with the space needed for the try.

The Springboks were already chasing the game after a torrid first quarter, trailing 3-12. They managed to keep a finger-hold on the game though as flyhalf Handre Pollard nailed all his shots at goal for a 12-15 deficit at halftime.

Forty minutes can be a long time in rugby and De Klerk began the second half by making up for his blunder in the first half, injecting immediate energy with a blindside break and then putting a lovely grubber through for centre Lukhanyo Am to score.

South Africa had snatched a 17-15 lead and there was renewed hope.

But Springbok fans have spent a lifetime waiting for their team to really dominate the Wallabies on their home turf, and it was the home side who thoroughly dominated the rest of the match.

The lead lasted just eight minutes as the Wallabies won territory thanks to a good kick by scrumhalf Nic White and then Quade Cooper slotted a penalty for offsides (18-17).

The basic skills of passing and handling seemingly deserted the Springboks after the hour mark, a series of errors culminating in replacement scrumhalf Tate McDermott sniping from a scrum, Australia then went blind and a sublime offload by tighthead prop Taniela Tupou put Koroibete away for the try.

With 12 minutes remaining, another Brisbane battering was sealed as more woeful breakdown work by the Springboks gifted a turnover, replacement flank Pete Samu burst clear and set up an easy run-in for Koroibete’s second try.

The Springboks spent the last 10 minutes battering away in Wallabies territory but had nothing to show for it as they regularly turned possession over. It is hard to remember when last South Africa were so poor at usual strengths like the breakdowns and defence.